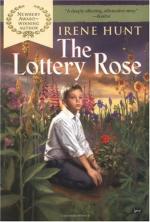 Irene Hunt
This Study Guide consists of approximately 26 pages of chapter summaries, quotes, character analysis, themes, and more - everything you need to sharpen your knowledge of The Lottery Rose.

This detailed literature summary also contains Topics for Discussion and a Free Quiz on The Lottery Rose by Irene Hunt.

The Lottery Rose by Irene Hunt focuses on the difficult life of a young boy faced with domestic abuse. After he is taken out of his abusive situation, he must heal himself with the help of new friends and people who care for him. He also learns how to forgive and not quickly judge others.

Georgie Burgess is a seven-year-old boy living in Tampa, FL. At school Georgie seems gruff, mean, and bullish. He talks back to teachers and gets into fights. Quickly the reader learns that Georgie is abused by his mother and stepfather. One day, while at the grocery store, Georgie is given a lottery ticket by Mrs. Sims, a clerk. Georgie feels as though he will definitely win. When the lottery drawing occurs, Georgie wins a rosebush. He is extremely excited by his prize. He runs home with his rosebush and is upset to see Steve, his mother's boyfriend. Steve beats Georgie with a leg of a chair. Georgie passes out from the brutality of the beating. When he wakes up, he is helped by a policeman and a nurse. Georgie is sent to live with Mrs Sims and her husband as their foster son. The court then decides Georgie should be sent to a boy's school.

Georgie arrives at school and meets Sister Mary Angela, a kind nun, who runs the school. He also meets a new friend, Timothy. Georgie was allowed to bring his rosebush to school. He gets excited when he sees a beautiful garden in which he wants to plant his rosebush. Everyone tells Georgie he may not plant the rosebush in Mrs Harper's garden. Mrs Harper lost her son and husband in a terrible car accident. The garden is her only memory of them, so she allows no one from the school to disturb the garden. Georgie does not listen. He sneaks out of school one night and buries his rosebush in Mrs. Harper's garden. The next day Georgie discovers that Mrs. Harper has ripped his plant out of the ground. He marches back to the garden and begins replanting the bush when Mrs. Harper approaches Georgie. As she yells at him she sees the scars from his beatings. Georgie passes out from a fever.

Georgie must spend a lot of time recovering from his wounds. He learns through Tim and Sister Mary Angela that Mrs Harper is sorry and has replanted his rosebush. Georgie is also visited by Robin and Mr. Collier, Mrs. Harper's son and father. Mr. Collier decides to teach Georgie to read. Time passes and Georgie gets to know Mr Collier and Robin better. He acts like a big brother to Robin. Mrs. Harper decides to pay for Georgie's tuition at the school and to go to Georgie's choir show. Georgie is slow to forgive her, but slowly realizes that he likes (maybe even) loves Mrs. Harper like a mother. Just as Georgie feels he can completely forgive her, disaster strikes. Robin wonders into a pond and drowns. Mrs Harper and Georgie grow closer through their own mutual losses.

More summaries and resources for teaching or studying The Lottery Rose.