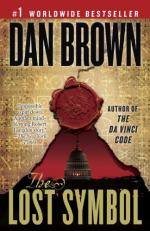 Dan Brown
This Study Guide consists of approximately 110 pages of chapter summaries, quotes, character analysis, themes, and more - everything you need to sharpen your knowledge of The Lost Symbol.

This detailed literature summary also contains Quotes and a Free Quiz on The Lost Symbol by Dan Brown.

NOTE: All citations in this Study Guide refer to the Kindle version of The Lost Symbol, by Dan Brown, published Sept. 15, 2009.

A man bent on becoming a deity of darkness attempted to reveal the secrets of the centuries old establishment of the Masons and block advancement in Noetic Science in the novel The Lost Symbol, by Dan Brown. Professor Robert Langdon believed he had been called to Washington by his best friend Peter Solomon to give a lecture. Instead, he found himself in the middle of a race with time to solve the mysteries of the Masonic Pyramid. He must decode the pyramid in order to save his friend and, possibly, the future of the nation from this mad man who wants to destroy knowledge and increase the power of darkness.

Langdon was surprised to receive a last minute phone call from the assistant of his friend, Peter Solomon, asking Langdon to give a lecture in the Capitol Building that evening. Instead of a packed lecture hall, Langdon arrived at the Capitol to find an empty room. As Langdon tried to determine what was happening, the severed hand of Peter appeared in the Rotunda of the Capitol Building. This hand was tattooed and arranged in the form of the Hand of Mysteries, an ancient symbol depicting an invitation. Before he knew what was happening, Langdon had been hijacked by the leader of the CIA’s office of Security to help find and decode the Masonic Pyramid. The CIA had received a tip that Langdon was the only one who could decode the pyramid. Though he did not realize it, Langdon had been tricked by the stranger, Mal’akh, who had called him pretending to be Peter’s assistant into bringing a box with him that Peter had left with Langdon for safekeeping. Langdon later learned this box contained the capstone of the pyramid, the piece needed to decode the engravings of the pyramid.

Meanwhile, the man named Mal’akh, who had kidnapped Peter, charmed Peter’s sister Katherine into trusting him. Katherine, a Noetic Scientist, was making breakthroughs in the science of determining the power of the human mind. Because he believed he would be rewarded by the dark forces by destroying her work, Mal’akh blew up Katherine’s lab. He attempted to kill her, but she was able to escape and join Langdon in his efforts to save Peter.

Because the CIA does not have saving Peter’s life as its first priority, Katherine and Langdon are able to get away from the CIA with the help of William Bellemay, the Architect of the Capitol and a friend of Peter. They try to decode the pyramid as they out run the CIA. Just as they are caught, Langdon and Katherine make a call to Mal’akh’s phone. They believe that Peter has been freed because they talk to a security guard who claims to be at the house. The CIA leader allowed them to go to Mal’akh’s house. As it turned out, they had been tricked again by Mal’akh. Mal’akh took them hostage and killed the CIA agent who was sent with them. Langdon was put in a sensory deprivation chamber and forced to tell Mal’akh the location to which he believed the Masonic Pyramid was pointing him. Mal’akh took blood from Katherine, leaving her to die. Then, he took Peter to the Temple Room of the House of the Temple. Mal'akh intended to sacrifice himself there.

In the Temple Room, Mal’akh demanded that Peter give him the Lost Word so he could write it on the top of his head, the only spot of his body that was not tattooed. Peter gave him a symbol to write there, and Mal’akh went on with his ritual believing that Peter had told him the truth. Just before Mal’akh told Peter that Peter was the one who would kill him, he also told Peter that he was Zachary, Peter’s son. Peter had believed that Zachary was dead.

Peter was sorrowful, then angry. Instead of stabbing his son with the knife he was given, Peter jabbed the blade into the stone altar breaking its blade. Mal’akh died when a helicopter was brought over the skylight in the Temple Room in order to kill Mal’akh’s laptop and keep a video Mal’akh had made of his own initiation into the Masons from becoming public. When the helicopter pilot tried to pull the copter away from the building its strut hit the skylight and broke it. Mal’akh was impaled by pieces of glass from the broken skylight. Instead of the joyous reception he expected when he died, Mal’akh went into a place of darkness and fear.

Because of his dedication to Peter, Peter showed Langdon at the end of the novel where the Ancient Mysteries, also known as the Lost Word, were buried. He explained that the Mysteries were actually a copy of the Bible buried in the capstone of the Washington Monument. The last image in the novel is that of Katherine and Langdon watching the sun rise over the Washington Monument, a sign that light always wins over darkness.

More summaries and resources for teaching or studying The Lost Symbol .