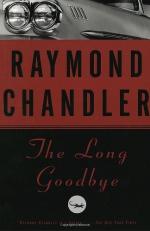 Raymond Chandler
This Study Guide consists of approximately 38 pages of chapter summaries, quotes, character analysis, themes, and more - everything you need to sharpen your knowledge of The Long Goodbye.

This detailed literature summary also contains Topics for Discussion and a Free Quiz on The Long Goodbye by Raymond Chandler.

Phillip Marlowe, a private investigator, first sees Terry Lennox outside a club. Terry is very drunk and falls from his car. Marlowe picks him up and helps him get home. He similarly rescues Terry again when he's drunk on a street and attracting the attention of a cop. The two spend a few evenings together drinking gimlets until the day Terry arrives at Marlowe's apartment asking for a ride to the airport in Tijuana. Marlowe obliges and is soon questioned by the police for his involvement in helping Terry escape after killing his wife, Sylvia. Marlowe refuses to answer questions, which earns him several nights in jail until the police have word of Terry's suicide in Mexico and a signed confession. Marlowe thinks it's too convenient but can't prove anything.

He's approached by a book publisher named Spencer to help Roger Wade finish a book. Roger is drinking heavily and Spencer, at the urging of Roger's wife Eileen, believes Marlowe can find the cause and eliminate it. Eileen then says that Roger has been missing three days and Marlowe agrees to find him. He makes a series of discoveries soon after locating Roger - Eileen was previously married to Terry Lennox though he used the name Paul Marston on the marriage license and that Roger was sleeping with Sylvia at the time of her murder. He deals with a houseboy named Candy who wants to protect Roger and believes Marlowe represents a danger to Roger and with Eileen's seemingly uncaring attitude toward her husband. Roger is soon found dead in his study of an apparent self-inflicted bullet wound. In the end, Marlowe wins Candy's loyalty by determining that Eileen killed Roger and showing his own trust in Candy. Sylvia then commits suicide and leaves a confession that it was also she who killed Sylvia.

Marlowe continues to worry about Terry's death. He seems to think that it might have been murder and it's not until near the end of the story that he latches onto a seemingly slight inconsistency in the story. Terry wrote a letter to Marlowe and sent him a five thousand dollar bill. He writes that he's sending a waiter with the letter to the mailbox on the corner near his hotel. With a little research, Marlowe discovers that the Mexican town is little more than a village and that there are no mailboxes. He questions a friend of Terry's - one of two men saved when Terry risked his life to throw a missile that had landed in their foxhole. Soon, the friend, Randy Starr, sends a note introducing a Mexican man named Cisco Maioranos. Marlowe soon reveals that he knows the man's true identity is Terry Lennox.

More summaries and resources for teaching or studying The Long Goodbye.