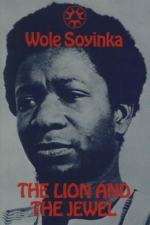 The Lion and the Jewel Summary & Study Guide

Wole Soyinka
This Study Guide consists of approximately 31 pages of chapter summaries, quotes, character analysis, themes, and more - everything you need to sharpen your knowledge of The Lion and the Jewel.

The Lion and the Jewel Summary & Study Guide Description

The Lion and the Jewel Summary & Study Guide includes comprehensive information and analysis to help you understand the book. This study guide contains the following sections:

This detailed literature summary also contains Quotes and a Free Quiz on The Lion and the Jewel by Wole Soyinka.

The following version of this text was used to create this study guide: Soyinka, Wole, The Lion and the Jewel. Oxford University Press, 1962.

The Lion and the Jewel by Wole Soyinka tells the story of Sidi, a young woman living in an isolated Nigerian village in the 1960s, as she decides who to marry. Her choices are Lakunle, a schoolteacher, and Baroka, the Bale of the village, meaning its senior authority figure.

The first scene, “Morning,” takes place outside of the schoolhouse. Sidi carries a pail of water on her head as she walks by and Lakunle rushes outside to criticize her for carrying it on her head, claiming that it will damage her neck. Lakunle then criticizes Sidi for dressing immodestly. Lakunle mentions his desire to marry Sidi and Sidi tells him that she will marry him whenever he likes, as long as he pays her “bride-price” (9) first. Lakunle claims that the custom of paying for a wife is offensive and refuses to do it.

The second scene, “Noon,” takes place on a road in Ilujinle. Sadiku, the eldest of Baroka’s many wives, approaches Sidi and tells her that Baroka wishes to marry her, much to Lakunle’s dismay. Seeing her photographs in the magazine has made Sidi suddenly aware of her beauty and she announces that she is now too good to marry Lakunle and too good to marry Baroka as well. Lakunle tells the story of how Baroka sabotaged an attempt to build a railway line near Ilujinle, which is performed in a mimed dance as Lakunle tells the story.

The scene continues in Baroka’s palace where Sadiku returns to tell Baroka that Sidi has rejected his proposal. Baroka confesses to Sadiku that he has become impotent and had hoped that marrying a young woman would cure him. Baroka makes Sadiku promise not to tell anyone about his impotence.

In the final scene, “Night”, Sadiku returns to the streets of the village where she gleefully celebrates the news of Baroka’s impotence and tells Sidi about it. Sidi decides to visit Baroka so that she can inwardly mock him. Lakunle opposes this idea because he fears that Baroka may become violent towards Sidi if he realizes that she is mocking him.

At Baroka’s palace, Sidi arrives and Baroka feigns no knowledge of Sadiku proposing to Sidi on his behalf. Baroka reveals to Sidi that he has plans for the village to print its own stamps and promises Sidi that he will print her picture on the stamps, meaning that her face will become famous throughout the country.

Back in the village, Sadiku and Lakunle watch a mimed dance performance spreading the news of Baroka’s impotence. Sidi returns to them in floods of tears. Lakunle fears that she has been raped and Sidi confirms to Sadiku that she is no longer a virgin. Lakunle announces that he will marry Sidi despite this and Sidi runs away. Sadiku follows Sidi and then returns to Lakunle. Sadiku tells Lakunle that Sidi is preparing herself for a wedding. This news shocks Lakunle who feels that things are moving too fast. Sidi returns and laughs at Lakunle for believing that she would marry him. Sidi announces her intention to marry Baroka, who had faked his impotence as a way of luring Sidi to visit him. Sidi exits the stage singing.

More summaries and resources for teaching or studying The Lion and the Jewel.

The Lion and the Jewel from BookRags. (c)2022 BookRags, Inc. All rights reserved.