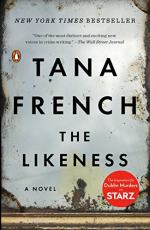 Tana French
This Study Guide consists of approximately 77 pages of chapter summaries, quotes, character analysis, themes, and more - everything you need to sharpen your knowledge of The Likeness.

Whitethorn House is the house that Simon March left to his nephew, Daniel. Daniel and his four closest friends moved into the house to live together. Daniel had a plan that they would be able to spend their lives thinking, reading, and enjoying each other’s company without having to work typical jobs if they lived and supported each other. He gave his four friends: Lexie, Abby, Rafe, and Justin equal shares in the house so they would agree to stay with him. Lexie was stabbed in the kitchen of this house when it was discovered she was negotiating with Ned to sell her portion of the house. Whitethorn House was burned to the ground after the police took Cassie and the others to the police station following Daniel’s death.

This abandoned cottage is the place where Lexie’s body is found by a...

More summaries and resources for teaching or studying The Likeness.

The Likeness from BookRags. (c)2022 BookRags, Inc. All rights reserved.