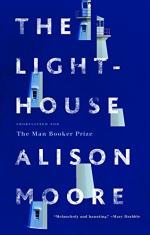 Moore, Alison
This Study Guide consists of approximately 68 pages of chapter summaries, quotes, character analysis, themes, and more - everything you need to sharpen your knowledge of The Lighthouse.

The Lighthouse Summary & Study Guide includes comprehensive information and analysis to help you understand the book. This study guide contains the following sections:

This detailed literature summary also contains Quotes and a Free Quiz on The Lighthouse by Moore, Alison.

The following version of this book was used to create this study guide: Moore, Alison. The Lighthouse. Salt Publishing, 2012.

Futh, a middle-aged man who recently separated from his wife, takes a ferry from England to Germany to undergo a walking holiday along the river Rhine. Throughout the trip, Futh relives memories of his Europe trip as a young man, especially those surrounding his mother's abandonment the day after a picnic on the cliffs of Cornwall. His memories are triggered by the scent of violets, oranges, coffee, and cigarette smoke. Futh applies this obsession with aromas to a career as a maker of synthetic scents. The chapters shift between Futh's story and the story of Ester, the landlord of Hellhaus hotel in Germany, where Futh stays on his first and last night. Ester's memories revolve around her jealous yet neglectful husband Bernard, who forbids any man from approaching her with the threat of violence. Futh and Ester's stories are intertwined by their associations to scents, especially the Dralle violet perfume in a lighthouse shaped container, and cherished objects that transport them to memories of love lost. Although most of the novel takes place in Futh and Ester's memories, it is tied together by Futh's unsuccessful walking trip through Germany and the detours that lead him back to a baleful fate in Hellhaus hotel.

Futh takes a ferry from England to Germany, where he meets Carl, a man visiting his mother who lives in Utrecht. Futh offers him a ride to see his mother, and then goes on his way to the Hellhaus hotel. Futh remembers taking the Europe trip with his father, after his mother left the family to return to her home in New York. Meanwhile, Ester prepares the Hellhaus hotel for his arrival. Unbeknownst to her husband, Ester takes a man to room ten to have sex with him. Futh's memories revolve around his father's abusive behavior, his mother's abandonment, and Gloria, a recent divorcee and neighbor, who attempts to seduce him as a young man. Ester is concerned with issues of aging and her desire to appear attractive to her husband Bernard, who continues to ignore her regardless of her attempts to look like she did when she was 21, when they first met. She attempts to find romance in secondary objects, like a collection of memorabilia, or her affairs with men in the hotel.

In the following chapters, Futh remembers the first time he met Angela, his wife, while he was hitchhiking through England. Their marriage is characterized by Angela's annoyance with his Futh's obsession with his mother, compounded by his passivity and inability to care for himself, that manifests in his refusal to learn how to drive until his forties. Angela asks for a separation shortly after Futh finds his high school best friend, Frank, emerging from his home while Angela is changing in their bedroom, suggestive of an affair. The novel often returns to Futh's memory of a picnic with his father and mother on the cliffs of Cornwall. His father tells them the history of a lighthouse, that could not prevent all shipwrecks from happening regardless of its warnings. His mother remarks how much he bores her. In frustration, Futh crushes his mother's Dralle silver lighthouse perfume in his hands. When it breaks, it cuts his palm and releases the scent of violets, that he learns to associate to her and her absence.

Although Futh attempts to undergo his walking journey in the woods, he quickly gets tired and abandons the trip. Futh goes into the woods again a second time, but takes a wrong turn and gets lost. It takes him an hour to find someone who points him in the right direction. In the morning, after a series of detours, Futh decides to abandon his walking trip and go to Utrecht to see Carl and his mother, but he misses two buses and only has the option of returning to Hellhaus, where his luggage and car are waiting for him. Ester finds Futh's Dralle silver lighthouse in his suitcase and steals it. When Futh returns and notices that it is missing, he goes searching for it in Ester's room. He enters her room and when he hears her arrive, he hides in her bathroom. He sees the lighthouse and puts it in his pocket before she can discover him. He hides until someone opens the door and he smells the scent of camphor, which Ester associates to her husband and Futh associates to his mother. Futh does not make it to the ferry and the novel ends with Carl on the ferry, wondering what might have happened to Futh.

More summaries and resources for teaching or studying The Lighthouse .

The Lighthouse from BookRags. (c)2022 BookRags, Inc. All rights reserved.