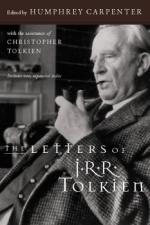 J. R. R. Tolkien
This Study Guide consists of approximately 37 pages of chapter summaries, quotes, character analysis, themes, and more - everything you need to sharpen your knowledge of The Letters of J.R.R. Tolkien.

The Letters of J.R.R. Tolkien Summary & Study Guide includes comprehensive information and analysis to help you understand the book. This study guide contains the following sections:

This detailed literature summary also contains Topics for Discussion and a Free Quiz on The Letters of J.R.R. Tolkien by J. R. R. Tolkien.

This book is a nonfiction collection of letters by one of the most popular genre fiction novelists of the 20th century. This collection of letters covers a large portion of his adult life. Included are those years that he spent writing his most famous fiction books: The Lord of the Rings series and The Simarillion. The work has been compiled and edited by Humphrey Carpenter with the help of Christopher Tolkien who is a descendant. Christopher is the younger of JRR's two sons. The book was published in 1981.

During the Introduction, the assistant explains that he has made a number of omissions. He also explains why. In the case of the letters to the woman who was the focus of his love life, Christopher Tolkien explains that he is not willing to expose such personal information of JRR Tolkien. The presumption is that the main target audience of the book is a fan of the author's fiction. For this reason, Christopher comments on how this quality was used to select the most suitable letters. He provides a clear delineation of the system used to refer to these: He uses 4 dots "...." to indicate that he has omitted information. Whenever the traditional 3 dots "..." appear, readers can be certain that JRR Tolkien did that himself within the original letter. This reveals a helpful conscientiousness on the part of the editor.

He has used omission for discretion in this case, although he clarifies that in general, the author was not secretive. The letters cover quite a variety of the aspects and areas of his life. These naturally include others, often as parts of anecdotes. While any individual one does not provide a full account of the situation, the composite set of letters allows readers to develop a relatively full and rich picture of what his life is really like. The recipients of the letters also indicates who was prominent at the time, and also which relationships were. One is a relative and close friend, whereas the other is a representative of one of publishing houses with whom the author gets actual contracts. While for readers these are impressive, for writers they represent often hard won victories and may well be worth crying over. In total, the book covers decades of the author's life. While much remains unknown the essence of this man is shared. He was passionate and gifted when it came to languages. He worked extensively with real ones and for fun he invented others. He was an excellent teacher and he brought to life a wonderful Fairy-tale designed for the British Isles.