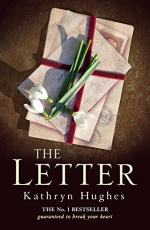 The Letter Summary & Study Guide includes comprehensive information and analysis to help you understand the book. This study guide contains the following sections:

This detailed literature summary also contains Quotes and a Free Quiz on The Letter by Hughes, Kathryn .

The following version of the novel was used to create this study guide: Hughes, Kathryn, The Letter. Headline, March 19, 2015. Kindle.

In the novel, The Letter by Kathryn Hughes, Tina Craig learned that disappointment and loss can sometimes lead to an even bigger blessing. Her journey began when she discovered an unopened letter in the pocket of a suit donated to a charity store and decided to search out the woman to who the letter was addressed. Tina’s possession of the letter resulted in unexpected consequences, both tragic and joyful.

The novel is composed of a pair of parallel stories. The story of Billy and Chrissie is set in 1939 as England was preparing to join the fighting in World War II. From the time they first saw each other, Billy and Chrissie knew they were right for one another. They dated even though Chrissie’s father did not approve of Billy and in a burst of passion because one of Billy’s friends received his call up papers for military training, had sex one day. When Chrissie told Billy that she was pregnant, he ran away, claiming he needed to alone to process what she had told him. Later, he realized he had been wrong to leave Chrissie alone and wrote her a letter, hoping she would forgive him.

Meanwhile, Chrissie’s father, Dr. Skinner, realized something was amiss in the relationship between Chrissie and Billy. He used it to his advantage to tear the couple apart. When he met Billy on the way to deliver his letter to Chrissie, Dr. Skinner convinced Billy it would be best if Dr. Skinner were to deliver the letter since the mail system would be compromised because of the war. Billy told Dr. Skinner that Chrissie was pregnant and that his letter contained a marriage proposal. In order to assure that Billy and Chrissie could have no contact with one another, Dr. Skinner sent Chrissie to Ireland to live with her aunt until her baby was born. She never received the letter that Billy wrote to her. Her aunt arranged for Chrissie to go to a convent to have her baby. She was forced to give the baby up for adoption.

The second story is set in 1973. In it, Tina, who was stuck in an abusive relationship, discovered Billy’s letter to Chrissie in the pocket of a suit donated to the charity shop in which she worked. She decided to try to find Chrissie and deliver the letter to her. In the meantime, Tina got pregnant by her abusive husband. When he learned about the baby he promised to stop drinking and make changes in his life. He started off well but eventually returned to his old ways of drinking and abuse. He found the letter written to Christina, which was also his wife’s full name, and assumed it was written to Tina from a lover. He would not listen to her explanation but instead punched her in the stomach, causing her to lose the baby. Rick was found dead a short time later. The police believed he had choked on his own vomit.

At this point, Tina devoted herself to finding Chrissie and giving her Billy’s letter. In the course of her search, she met William Lane, the son of Chrissie and Billy, who was looking for his birth mother. They joined forces to find her. As they got to know one another, they fell in love.

After a discouraging search, Tina and William did finally find Chrissie and deliver the letter to her. William and his mother were reunited. Chrissie learned from the letter that Billy had not abandoned her, as she had been allowed to believe he had. This knowledge gives Chrissie the strength she needs to admit her love for Jackie, the who has been helping her on her aunt’s farm since she arrived there thirty-four years earlier. Both Chrissie and Jackie, and William and Tina are married.

The Letter from BookRags. (c)2022 BookRags, Inc. All rights reserved.