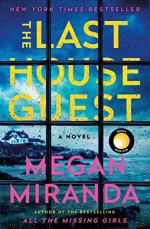 Related Topics
All the Missing Girls

Megan Miranda
This Study Guide consists of approximately 56 pages of chapter summaries, quotes, character analysis, themes, and more - everything you need to sharpen your knowledge of The Last House Guest.

This detailed literature summary also contains Quotes and a Free Quiz on The Last House Guest by Megan Miranda.

The following version of this book was used to create the guide: Miranda, Megan. The Last House Guest. Simon & Schuster, 2019.

Miranda divides The Last House Guest into 30 chapters set in the late summer of 2018, multiple flashback scenes to the Plus-One Party in the summer of 2017, and a concluding scene in the summer of 2019. The book commences in the midst of the Plus-One party in 2017. Avery Greer, a property manager for the wealthy Loman family, waits for her best friend, Sadie Loman, to arrive at Littleport's annual Plus-One party. She gets a "..." text message response from Sadie, indicating that she is typing something. However, the message is never sent. After the electricity goes out and a girl is pushed into the pool by a shadowy figure fleeing the rental property (Blue Robin), the police arrive and announce that Sadie Loman has been found deceased on nearby Breaker Beach.

Sadie's initial cause of death is listed as suicide, but the police - in particular, Detective Ben Collins - still treat Avery and several other party-goers as suspects. Sadie's spoiled and aloof brother, Parker, is one of the suspects, as is Connor Harlow, Avery's former friend and romantic interest. Avery begins to doubt whether Sadie actually killed herself.

A year after Sadie's death, the Lomans have established a suicide prevention program and are dedicating a brass bell to Sadie at a ceremony in Littleport. Avery, as Parker's unofficial assistant, is tasked with helping to write a dedication article and provide a picture of Sadie. Avery goes to Blue Robin and takes out a box of her old keepsakes. She also digs through a chest in the master bedroom and finds, buried deep beneath a pile of linens and blankets, Sadie's cellphone. Avery unlocks the cellphone and finds a series of photographs, including one of Harbor Drive, the only road that leads into and out of Littleport. As Avery later finds out, this is the spot where her parents were killed and grandmother mildly injured in a car crash over a decade ago. There is also a picture of Connor on Sadie's phone, which backs the rumors told by local Greg Randolph that Sadie and Connor were secretly seeing each other prior to Sadie's death.

This compels Avery to seek the truth about Sadie's death, which begins to look less like suicide and more like homicide. Avery begins piecing the puzzle together, which means having to confront the other people on Detective Collins' list of suspects: Connor, Parker, and Parker's now-ex girlfriend, Luce. As she tries to put the pieces together, someone is breaking into the Lomans' rental properties, Blue Robin being the first to get ransacked. These incidences force Avery to recall more details from the night of the Plus-One party. A window had been broken while Parker was fighting with another woman, which Luce saw and reported to Avery.

In speaking with Parker, Avery finds out that the supposed suicide note left behind by Sadie is actually a note that she wrote to Sadie after they had a fight in the summer of 2017. Avery had found out that someone, whom she assumed was Sadie, was embezzling from the Lomans' company. Avery also finds out that people assumed the journal the found in Sadie's possession belong to Sadie when it was actually Avery's.

Avery goes to speak with Connor, for whom she still harbors deep feelings. He admits to taking Sadie out on his charter boat. She had wanted to go to a small island called the Horse Shoe. Avery and Connor venture out to the island where Avery finds a flash drive that Sadie had hidden there. The flash drive reveals a routing number to a bank. This number matches a canceled check from Sadie's late grandmother. The Lomans were making payments to Avery's grandmother after the crash that killed the Greers.

Avery then goes to speak with Luce, who works as an occupational therapist at a hospital. She tells Luce that she believes someone at the party killed Sadie. Luce reveals that the fight she witnessed at the Plus-One party was between Parker and Faith. They had been in a secret relationship, and Parker had broken things off with Faith, prompting her to angrily break the window. This adds Faith to the suspect list. Avery confronts Connor, who admits to having seen Faith at the party and having told her to leave. Faith was trying to hit Parker in the head with a stone pillar but missed, instead hitting the window.

As it turns out, Faith has been entering one of the Lomans' properties, Sunset Retreat, with a key. Avery follows Faith and tells her she knows about Faith's relationship with Parker. Faith denies being the one who has been ransacking the Lomans' properties, and Avery admits that the Lomans have fired her. Faith then recalls seeing two people walk into the party, one of whom was wearing a blue skirt. Avery thinks this could be Sadie.

Avery reflects on the day after Sadie's death. She had seen tire marks in the grass along the roadside, indicating that someone had left the party in a hurry. She sees her own vehicle parked, facing outward, at Sunset Retreat and thinks of how foreign the car suddenly feels as she imagines Sadie in the front passenger's seat. She figures out that Sadie had been in the vehicle that took off quickly and that vehicle had been Avery's own car. She looks in the trunk and finds a buckle from one of the sandals Sadie was wearing before she died. Avery now knows that whoever took Sadie had done so in Avery's car, as a way to frame Avery for Sadie's death.

Avery finds the mortgage history for her grandmother's house, which the Lomans bought after her grandmother died. The records show a huge drop in mortgage payments a month after the auto accident. It now becomes obvious to Avery that her grandmother was being paid for her silence by the Lomans regarding the car crash. Sadie had uncovered one payment made to someone else in the same amount who knew about the deadly crash. Piecing it together, Avery works out that Parker had been behind the wheel of the vehicle that killed her parents. The Lomans were paying off her grandmother and then-police officer Ben Collins, who was the first to respond to the scene. The news coverage claimed it was a one-car accident, leaving out Parker's involvement.

Detective Collins finds Avery as the dedication ceremony begins. He admits his guilt in covering up Parker's involvement and killing Sadie, who was going to 'out' both him and Parker for their actions. Collins sets fire to Blue Robin and is about to kill Avery, who runs toward the area where the ceremony is happening. Collins and Avery end up at the edge of the cliff when Parker stumbles onto the scene. Collins tells him Avery knows about the crash and keeps a gun pointed at Avery. Parker figures out that Collins killed Sadie and lunges, pushing Collins off the cliff to his death.

The story ends a year later with Avery revealing that she has quietly been investing the money the Lomans gave her for her grandmother's house. This allows her to buy up properties around Littleport and start a rental business with Faith, with whom she has made amends. Parker has been confined to house arrest after taking a plea deal. Avery concludes by saying that Littleport favors those who take risks, as hers is now paying off.

More summaries and resources for teaching or studying The Last House Guest.