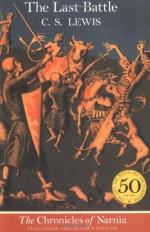 C. S. Lewis
This Study Guide consists of approximately 45 pages of chapter summaries, quotes, character analysis, themes, and more - everything you need to sharpen your knowledge of The Last Battle.

"The Last Battle" by C.S. Lewis begins by introducing a donkey named Puzzle and an Ape named Shift. They sit on the banks of the Caldron Pool beyond Lantern Waste. Puzzle has been convinced that he is not clever and that Shift should make all of the decisions. The two sit down and see something in the water. The item in the water is a lion skin, which Shift states was sent by Aslan for Puzzle to wear. Narnians would believe that Puzzle is Aslan and they would obey his commands. Shift modifies the lion skin to fit Puzzle.

Tirian is outside of his hunting lodge to escape Cair Paravel with his unicorn and trusted friend, Jewel. Jewel sits with him and they discuss the rumors about Aslan's return to Narnia. They hear a centaur approaching, and it is Roonwit who explains what he has seen and that the coming of Aslan is a lie. A dryad appears and explains that trees are being felled in Lantern Waste. Tirian arrives at the scene and ends up killing two Caloremenes after they abuse a talking horse. Tirian and Jewel are pursued by Caloremene and they decide to give themselves up and request an audience with Aslan.

They are brought to the Ape and then after questioning him, Tirian is tied up to a tree. Animals go give Tirian food and drink, but they do not untie him out of fear of reprisal. Tirian calls out for help and goes into a dream state and sees several people at a table for a meal. Two children soon appear and help him. They escape and he trains them in weapon use, then they go back to set the Unicorn free. Jill also finds Puzzle and Puzzle explains his situation.

They come across a band of Dwarfs and Tirian stops them. They are being sold into slavery and Tirian questions them in his disguise about whose orders they are following. Tirian reveals the deception to the Dwarfs. They are tired of Aslan's name and want nothing to do with either side. However, Poggin the Dwarf pledges his allegiance to Tirian.

They decide to meet Roonwit, only to find out from Farsight the Eagle that Cair Paravel has fallen and Roonwit the Centaur was killed. They decide to return to the Stable, but first Tirian wants the children to return to their own world. They refuse to go and do not have a way to return home anyways. They reach the Stable and watch as the Ape has Ginger the Cat go in and then a Calormene wants to go into the Stable.

Battle soon ensues and the Dwarfs kill the Talking Horses. Tirian grabs Rishda Tarkaan and brings him into the Stable with him only to discover that Tash appears. Tasha pounces on Rishda Tarkaan and then the Kings and Queens of Narnia appear, and finally Aslan. Aslan wakes Father Time and brings an end do the earth with shooting stars. The animals go with Aslan and the others. The world is left to be eaten by lizards and dragons.

Narnia as they knew it comes to an end, but Aslan brings them to the other Narnia. They discover that they are dead and are going to stay at the true Narnia.

More summaries and resources for teaching or studying The Last Battle.