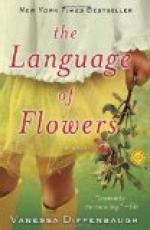 The Language of Flowers: A Novel Summary & Study Guide

Vanessa Diffenbaugh
This Study Guide consists of approximately 36 pages of chapter summaries, quotes, character analysis, themes, and more - everything you need to sharpen your knowledge of The Language of Flowers: A Novel.

The Language of Flowers: A Novel Summary & Study Guide Description

The Language of Flowers: A Novel Summary & Study Guide includes comprehensive information and analysis to help you understand the book. This study guide contains the following sections:

This detailed literature summary also contains Topics for Discussion on The Language of Flowers: A Novel by Vanessa Diffenbaugh.

"The Language of Flowers," a novel by Vanessa Diffenbaugh, is the New York Times Bestselling story about Victoria Jones, her passion for flowers and how her use of flowers helped her to communicate with others and helped her come into her own.

In the first main section of the book, the reader is introduced to Victoria. In the chapters written from the perspective of her childhood, the reader learns about several of the negative experiences Victoria had while living in foster care but is also introduced to a main caregiver in Victoria's life, Elizabeth. The reader learns that Victoria and Elizabeth had a close bond, and that Elizabeth instilled in Victoria the love of flowers and their meanings. However the reader also becomes aware of the fact that Victoria did not continue to live with Elizabeth due to something going terribly wrong. In the chapters written from the Victoria's current perspective, the reader learns that Victoria is 18 and aging out of the foster system. Even though she squanders her housing opportunity and ends up homeless, the one constant in her life is flowers. Her knowledge of flowers allows her to get a job at Bloom, a local flower shop. She also meets Grant, who turns out to be Elizabeth's nephew, when they bond over their shared knowledge of the meaning of flowers.

The second section of the book furthers the plot for Victoria as both a child and adult. Through her childhood perspective, Victoria and Elizabeth's bond deepens. Victoria also learns that Elizabeth and her sister, Catherine, have been estranged for many years. The lack of relationship with any of her family members causes Elizabeth to miss the court date where she was going to adopt Victoria, an event that began a downward spiral in Elizabeth's and Victoria's relationship. From her current perspective, Victoria becomes a permanent employee of Bloom and finds a residence. Victoria and Grant also develop a romantic relationship, but Victoria feels extremely uncomfortable with their level of intimacy and finds herself pulling away from him. When she learns that she is pregnant, Victoria feels sure that she will disappoint Grant and she decides to leave him without saying goodbye.

Victoria's life begins to unravel from both perspectives in the third section of the book. In her life with Elizabeth, Victoria learns that Catherine is ill and has made threats to burn down Elizabeth's vineyard. One night, Victoria decides that she has to prove to Elizabeth who Catherine really is so she decides to set Elizabeth's vineyard on fire. Feeling immediately guilty, Victoria uses the bruises and burns she received from the fire to lie about Elizabeth's treatment of her, causing Victoria's permanent removal from Elizabeth's house. In her adult life, Victoria begins her own business, Message and gives birth to a daughter, whom she doesn't name. However she soon finds herself overwhelmed by the constant needs of her daughter. Driven by her fear of inadequacy and her fear that she will never be able to give her daughter the life or love she deserves, Victoria leaves her daughter with Grant when Grant is not home.

In the fourth and last section of the book, Victoria's timelines merge and she is able to receive closure for childhood and current experiences. She is overcome with the urge to apologize to Elizabeth and, in her effort to do so, she sees her daughter again and reconnects with Grant and Elizabeth. Victoria is surprised but grateful for the unconditional love and forgiveness of Grant, Elizabeth and her daughter, Hazel, and she makes a commitment to learn to how incorporate their love and relationships into her life. The story ends with Victoria making the decision to believe that she doesn't have to continue to be the hurt little girl she once was and that she just might have the capability to learn to love.

More summaries and resources for teaching or studying The Language of Flowers: A Novel.

The Language of Flowers: A Novel from Gale. ©2005-2006 Thomson Gale, a part of the Thomson Corporation. All rights reserved.