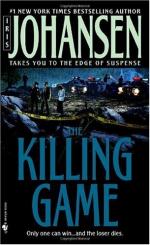 Iris Johansen
This Study Guide consists of approximately 70 pages of chapter summaries, quotes, character analysis, themes, and more - everything you need to sharpen your knowledge of The Killing Game.

This detailed literature summary also contains Topics for Discussion on The Killing Game by Iris Johansen.

The Killing Game by Iris Johansen is a suspense novel. While it stands alone as a complete book, it is part of the Eve Duncan Series. Eve Duncan and Joe Quinn are partners who solve cases involving missing children. This book begins with skeletons that are discovered in the vicinity around Talladega Falls, Georgia. Since one of the bodies is a child and the bodies have been buried at least ten years, the child might be Eve's daughter, Bonnie. Joe Quinn is in Georgia looking at a serial killer's graveyard as the story starts. He knows that Eve will want to sculpt the head of the child. It might be Bonnie. Eve has been looking for Bonnie for a long time. She has found many other children but not Bonnie.

Joe Quinn has just gotten divorced and at last he is free to pursue Eve as a lover and wife instead of just a friend and partner. Joe arranges for Eve to sculpt the head. The head disappears and Eve begins getting threatening phone calls from the killer of the bodies in Talladega Falls. The monster, Dom, wants to play a sadistic game with Eve. While he threatens her, he also tells her about a child in Atlanta who is like a reincarnation of Bonnie. He threatens the child, Jane, but gives Eve some clues so she can find Jane and bond with her.

Eve does find Jane. Dom starts killing people around Jane as well as people who are part of the search for him. The body count mounts as the book progresses. The FBI agent on the case talks about the monster being a super monster. This serial killer is worse than Ted Bundy. Johansen writes scenes that prove how diabolical and evil Dom is.

Eve has to kidnap Jane in order to keep her safe. Of course, Eve comes to care for Jane and bonds with her. Jane is very streetwise and never gives an inch. Jane doesn't want anyone to know she cares. Jane has had too many disappointments in life. Eve doesn't push Jane to like her, and they come to a friendship. Jane also falls in love with the dog, Monty, who is introduced in this book. Monty is a search and rescue dog. Sarah is his handler. Sarah, Eve, and Jane are three very strong personalities.

As the story progresses, the scene moves to Phoenix, Arizona, and Dillard, a little town not far away, where Dom grew up. The backstory is told about his evangelist father who was a hell-fire abuser. As the police get closer to Dom, the suspense builds. A FBI man is killed. Johansen has given enough information about those killed, that the reader feels bad about their end and Dom's escape from punishment.

The scene which Eve Duncan fans have been waiting for comes after the FBI man is killed. Joe tries to rescue two men from a car that is ready to blow up and Eve believes that Joe has been caught in the explosion. Eve finally admits to herself that she is in love with Joe. She reacts to her fear for Joe's life by yelling at Joe when she discovers that he escaped death. She might not admit her love out loud to Joe but it is no longer stifled and hidden from herself as well as the reader.

Eve finally comes to the climax. She plans to meet with Dom. She tries to have police protection. It turns out that the protection is the monster. As the last chapter comes barreling to the close, the novel's pacing is excellent and the ending is satisfying for the reader.

More summaries and resources for teaching or studying The Killing Game.