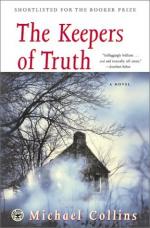 The Keepers of Truth Summary & Study Guide includes comprehensive information and analysis to help you understand the book. This study guide contains the following sections:

This detailed literature summary also contains Topics for Discussion and a Free Quiz on The Keepers of Truth by Michael Collins (Irish author).

The story starts out in a small, forgotten Midwestern town. Bill, a reporter for the local newspaper, laments on how the town used to be bustling with factories and shops, and now those factories have been shut down and the people in the town have resorted to working in fast food restaurants to make a living. Bill is a college graduate who did not pass his LSAT exam and therefore couldn't go to law school, so he has come back to his hometown to live in his grandfather's mansion.

Bill's grandfather was a rich man who made his money in the refrigeration business, but when his father took over the business the factory was shut down by overseas competition. Bill's father then became an alcoholic and a womanizer, who shot himself in the head in the mansion. Bill works at the newspaper with Sam and Ed. Sam is the owner of the paper, and Ed is the photographer. Both men have been working together for 30 years and are in their 60's.

The story unfolds when Ronny Lawton, the town troublemaker, calls in a missing person's report on his father. An investigation starts, and a chopped off finger is found at Ronny's father's house, where Ronny also lives. Everybody in town right away assumes that Ronny killed his father and chopped up his body. By a turn of events, Bill gets himself dragged in to the situation with Ronny. He gets close to Ronny, learning some personal things about him that make him seem like less of an animal than others think he is. Bill also gets involved with Ronny's estranged wife, Teri. Teri is a simple woman who lives out in the cornfields in a trailer with her boyfriend. Bill spends some time with Teri and gets close to her.

Teri gets her hair done at the place of Ed's wife's, Darlene. It turns out that she has confided in Darlene that Ronny's father had raped her, and she is not sure if her child is Ronny's or his father's. We learn that Darlene has a connection with Karl, Teri's boyfriend, and it becomes obvious that Ronny may not have killed his father after all. Bill is convinced of this. Once the father's head is found, the police try to arrest Ronny, but not before he is able to barricade himself in his house taking Teri and their child hostage. He kills Karl in the meantime, and we learn that this is out of desperation. Ronny realizes that there is no way he can stay a free man after this, and he does not want Karl raising his child. In the end, Bill leaves town with Teri and the child, and Ronny sets fire to the house and to himself. Everybody in town, including the police and the FBI, is sure that Ronny was the killer and the case is closed. In fact, the case is never solved, since Bill and Darlene are the only two people who know what really happened.

The Keepers of Truth from BookRags. (c)2022 BookRags, Inc. All rights reserved.