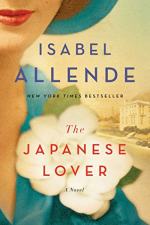 Related Topics
And of Clay Are We Created
Aphrodite
Aphrodite: A Memoir of the Senses
City of the Beasts
Daughter of Fortune

Isabel Allende
This Study Guide consists of approximately 68 pages of chapter summaries, quotes, character analysis, themes, and more - everything you need to sharpen your knowledge of The Japanese Lover.

This detailed literature summary also contains Quotes and a Free Quiz on The Japanese Lover by Isabel Allende.

As penance for her life filled with material possessions and great wealth, the eccentric 80-year-old Alma Belasco decided to spend the rest of her days at Lark House, a senior retirement community, in the novel “The Japanese Lover” by Isabel Allende. Alma hired Irina, an employee at Lark House, as a secretary. Irina soon began helping Alma’s grandson, Seth, compile a family history. The two soon discovered that Alma had a secret Japanese lover in her life.

It was only after Irina Bazili began working at the Lark House that she began to find peace in her life. She not only had her full time job but also worked part time for Alma helping that lady with chores she could no longer do and providing secretarial services. Irina additionally agreed to help Alma and her grandson, Seth, compile a family history. As the two got to know Alma’s routine better, they noticed she received a box of flowers and a letter in a yellow envelope each week. She also took strange, often spur of the moment trips away from Lark House. The two believed Alma was meeting Ichimei Fukuda, a Japanese man with whom she’d been having an affair off and on all during her life.

Meanwhile, Seth fell in love with Irina, who was an emigrant from Moldova, but could not get her to return his affection. After Irina was visited at Lark House by an FBI agent, Catherine Hope confronted Irina about her haunting past. It was with Cathy’s urging that Irina told Seth about the sexual abuse she’d received from her stepfather when she first came to America and the photos and videos that he’d sold of her.

After she’d lived at Lark House nearly three years, Alma’s health began failing. She was having chest pains and often grew confused. This didn’t stop her from taking one last trip. On the way home from her trip Alma crashed her car. She died of her injuries a few days later in the hospital. While Irina was sitting with Alma the last night of her life, Irina saw a Japanese man whom she believed was Ichimei come into the room. It was only later that Seth told Irina it couldn’t have been him because Ichimei had died of a heart attack several years prior.

Through the course of the novel the author weaves the stories of the lives of Alma; Nathaniel, who was her cousin and later her husband; Ichimei; and Irina as those lives developed over nearly a century. Major themes in the story include social class, materialism and enduring love. The story also touches on World War II, the imprisonment of the Japanese Americans in America, homosexuality, interracial marriages, sexual abuse and its aftermath, emigration, abortion, generosity, affluence and the depravity of man.

More summaries and resources for teaching or studying The Japanese Lover.