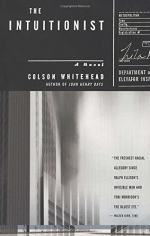 The Intuitionist: A Novel Summary & Study Guide includes comprehensive information and analysis to help you understand the book. This study guide contains the following sections:

This detailed literature summary also contains Quotes and a Free Quiz on The Intuitionist: A Novel by Colson Whitehead.

The following version of the book was used to make this Study Guide: Whitehead, Colson. The Intuitionist. Knopf Doubleday Publishing Group, 2000. Kindle Edition.

Lila Mae Watson is employed as an elevator inspector in an unnamed city similar to 1930s and -40s era New York City. She is the first colored female inspector in the city department, and belongs to the theoretical faction of Intuitionism. Intuitionists sense the elevator’s properties to determine if there are maintenance problems, rather than physically examining the elevator as the more traditional Empiricists do.

One day, there is an elevator accident at the Fanny Briggs Memorial Building, an important government building that Lila Mae inspects regularly. Lila Mae meets her friend Chuck at O’Connor’s bar, where many inspectors socialize but Lila Mae does not. He tells her that Chancre, the Elevator Guild Chair or leader of the elevator department, is blaming Lila Mae – and Intuitionism in general – for the accident. Lila Mae returns home to find two men named Jim and John searching through her apartment; another man named Mr. Reed, who is the campaign manager for Chancre’s opponent for Guild Chair, Orville Lever, enters and tells the men to leave.

After the break-in, Lila Mae stays at the Intuitionist House, a headquarters for Intuitionist leaders. While there, she learns from Mr. Reed that James Fulton, the founder of Intuitionism had designed a perfect elevator, or “black box,” and that blueprints of it have recently been sent to Lever, Chancre, and Lift magazine. Lila Mae also befriends a man named Natchez, who is filling in for his uncle as a housekeeper.

Part Two is first told from the third-person limited perspective of Ben Urich, a journalist for the popular elevator magazine Lift. Urich has written an article about Fulton’s black box, but discovers that it has been pulled from the magazine before its publication. He is abducted from his office by Jim and John and subsequently tortured. Meanwhile, Lila Mae is sent to interview Fulton’s former housekeeper, Marie Claire Rogers, whom the Intuitionists believe is in possession of Fulton’s notebooks containing the black box blueprint. When Lila Mae leaves, she is abducted and taken to the same unknown building as Ben Urich, where Chancre tells her to stop looking for the black box. When Lila Mae returns to her apartment, she sees it has been ransacked; Natchez tells her that Mr. Reed was responsible. He also reveals that Fulton was is uncle and was black but appeared white. Lila Mae and Natchez agree to work together to look for the black box.

Lila Mae dresses as a caterer and attends the annual elevator inspection celebration called the Funicular Follies. At the event, Chancre attempts to demonstrate a safe elevator, but Natchez secretly cuts the ropes, causing an accident. Lila Mae and Natchez follow Lila Mae’s coworker and the only other black elevator inspector, Pompey, whom Lila Mae suspects is responsible for the Fanny Briggs accident. Eventually, Lila Mae follows Pompey home and confronts him, but he claims that he was not responsible although he had taken employment bribes from the mob at Chancre’s urging.

Lila Mae decides to go to the Lift magazine building to attempt to find copies of the blueprint. While there, she finds Ben Urich, who shows her the complete designs for Fulton’s black box. Urich tells Lila Mae that Arbo and United, the biggest elevator manufacturers in the world, want control over the black box because their sales are declining: Jim and John were employed by Arbo, as well as a man named Raymond Coombs, who Lila Mae realizes is Natchez after looking at a photograph. Jim and John break into the office and abduct Urich, but Lila Mae escapes across the street and hides in Happyland Dime-A-Dance.

Lila Mae returns to the Fanny Briggs building and intuits that the elevator accident had been a freak accident, and no one had framed her. She returns to Mrs. Rodger’s house, which has been ransacked. Mrs. Rodger’s tells Lila Mae that Fulton, who really was black, had intended Intuitionism to be a joke, but had been distraught when no one in the elevator community recognized it as such. He had left instructions to Mrs. Rodgers to send the blueprints out: Mrs. Rodgers removes the final journals from a dumbwaiter and gives them to Lila Mae. Lila Mae then goes to the Arbo office and gives Raymond Coombs the journal.

In the final section, Lila Mae has bought a new apartment and is working on writing Volume Three of Theoretical Elevators, filling in the parts that Fulton was not able to complete in his notebook. The notebook that she had given to Coombs contained only fragments: Lila Mae is the only one who knows how to construct the truly perfect elevator according to Fulton’s complete instructions.

Throughout the novel, Whitehead intersperses sections from “Theoretical Elevators,” a textbook written by James Fulton. He also includes flashbacks to Lila Mae’s adolescence in a rural area and her time at a university known as the “Institute,” which is renowned for elevator studies. She experienced racism throughout her time at the school and was forced to live in a former janitor’s closet. She also frequently saw Fulton in the library at night from her room, and took an Intuitionism seminar.

The Intuitionist: A Novel from BookRags. (c)2022 BookRags, Inc. All rights reserved.