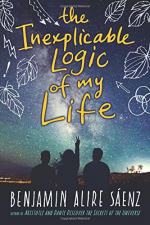 The Inexplicable Logic of My Life Summary & Study Guide

Benjamin Alire Saenz
This Study Guide consists of approximately 83 pages of chapter summaries, quotes, character analysis, themes, and more - everything you need to sharpen your knowledge of The Inexplicable Logic of My Life.

The Inexplicable Logic of My Life Summary & Study Guide Description

The Inexplicable Logic of My Life Summary & Study Guide includes comprehensive information and analysis to help you understand the book. This study guide contains the following sections:

This detailed literature summary also contains Quotes and a Free Quiz on The Inexplicable Logic of My Life by Benjamin Alire Saenz.

The following version of the book was used to create this study guide: Saenz, B.A. The Inexplicable Logic of My Life. Clarion Books, 2017. Hardcover Edition.

It is Sal's senior year in high school. This year he feels unsettled in a way that he has not felt in previous years. His feelings stem from realizing on some level that things are going to change. The changes start occurring on the first day of school when another student calls his adoptive father, Vicente, a faggot. Sal responds by punching him which is an uncharacteristic action. As the narrative continues, Sal also finds out that Mima's, his adoptive grandmother's , cancer has returned and she is terminally ill. This upsets Sal because he is close to Mima and he often tells her that he does not want her to die. He gets mad at God because he is taking her away from him. As he deals with these changes in his life, he has to write his college essay, which he has been putting off, and his father's ex-boyfriend, Marcos, returns. Marcos' return means that, for the first time, Sal may have to share his father's love with a romantic interest who lives with them. Vicente has raised Sal from the time that Sal's mother died, until now, as a single father.

Sal is not the only one trying to find his identity. During the same period of time, his friend Sam, who is like a sister to him, has her own issues to deal with. She has a very complicated and heated relationship with her mother, Sylvia. Sam, unlike Sal, is anxious to go to college and has a list of schools she wants to go to. She is working on her applications, but her mother holds up the process. While Sam often reports fights she has had with her mother, the two women spar in front of Sal and his father when Sam runs away from a party when her boyfriend tries to have sex with her there. Afterwards, however, Sam and her mother come to terms with each other. Their new relationship is short lived as Sylvia dies in a car accident. When this happens, everyone discovers that Sal's father is Sam's guardian and Sam comes to officially live with Sal and his father.

Another friend, Fito, whose mother is a drug addict, starts having more problems himself. His mother throws him out of the house after he refuses to give her the money he has earned to pay for his college education from the two jobs he has. When Sam and Sal find him one day on the street, Sam tells him that he can stay at her old house as it has not yet been sold. This event marks the beginning of Fito's integration into Sal's family unit.

Sal's grandmother dies at the beginning of the new year. At her funeral, Sal realizes that he has grown and he might not yet be a man, but he is no longer a boy. He starts working on his college essay and then one night he finally reads a letter that his father has recently given him that his mother wrote to him before dying. It answers many of the questions that he has had as he had thought that his behavior may have been a result of his biological father's genes. Even though she leaves information in an envelope that will lead him to his biological father, he concludes that Vicente is his father and burns the envelope.

By the end of the narrative, Sal has written his college application and has applied to Columbia. This is the same school that both his father and his mother attended and where they met. Sam has buried her mother's ashes and has come to terms with the fact that they loved each other, but in a different way than most people. Fito now has more confidence in himself and is no longer such a loner. In addition, Marcos and Vicente have decided to become a couple and Sal takes Marcos to dinner in order to get to know him better.

More summaries and resources for teaching or studying The Inexplicable Logic of My Life.

The Inexplicable Logic of My Life from BookRags. (c)2022 BookRags, Inc. All rights reserved.