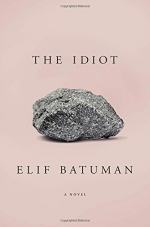 Elif Batuman
This Study Guide consists of approximately 37 pages of chapter summaries, quotes, character analysis, themes, and more - everything you need to sharpen your knowledge of The Idiot.

The Idiot: A Novel Summary & Study Guide includes comprehensive information and analysis to help you understand the book. This study guide contains the following sections:

This detailed literature summary also contains Quotes and a Free Quiz on The Idiot: A Novel by Elif Batuman.

The following version of this book was used to create the guide: Batuman, Elif. The Idiot. Jonathan Cape, 2017.

It is the early 1990s, and Selin Karadağ, an 18-year-old Turkish-American, is starting her first year as a student of linguistics at Harvard University. She is moving out of her mother’s house, who is separated from Selin’s father, and the novel begins as Selin moves into a student dormitory with two other girls, Hannah and Angela. The early sections of the novel deal with Selin’s difficulties at Harvard, and her sense of herself as an outsider: she fails to make it into the university orchestra, and does not get first choice of the classes she wants to attend. The classes she does go to, including linguistics and philosophy of language courses, fail to satisfy her. She is also culturally naive; she is a virgin, does not drink, and does not understand dance music or parties. This marks her out

Selin signs up for Russian language classes, where she meets and befriends a Yugoslavian woman, Svetlana. She also meets, but barely speaks to, a handsome Hungarian man named Ivan. In the classes they study a text called Nina in Siberia, in which a girl named Nina is mysteriously abandoned by her partner, also called Ivan. The story bears uncanny similarities to the unfolding plot of the novel. Selin busies herself during her first time writing a short story for a class called “Constructed Worlds.” Eventually, when her roommate Hannah reads the work, she insists that Selin should submit it for a student writing prize. Later in the year, the work wins the prize, and Selin gets her first publication.

Selin soon emails Ivan, parodying a letter from Nina in Siberia. He replies, and they embark on an increasingly affectionate, and increasingly poetic, intellectual exchange of emails, though they do not immediately start speaking in person. As their relationship develops, and as Selin opens up about her feelings for him, Ivan reveals that he has a girlfriend, named Eunice; he also reveals that he will finish his doctoral studies at the end of the year, and intends to move to California. Despite this news, Selin and Ivan start meeting up, and spend a few nights together, talking until the morning.

Ivan tells Selin he will be in Hungary for the summer, and that his friend, Peter, arranges for Harvard students to teach English at a summer school near his, Ivan's, home. He suggests that Selin should sign up, and she does so. However, not long after this, Selin meets Eunice, and Ivan acts in an increasingly selfish way to Selin. She and Ivan fall out over email. With the plans already made, she prepares to move to Hungary, via a few weeks spent with Svetlana in Paris.

The semester ends, and at the airport Svetlana and Selin bump into Ivan, who is coincidentally also flying to Paris before going home. They enjoy each other’s company on the flight, and decide to meet up when Selin is in Budapest, before the teaching. She enjoys a whirlwind stay in Paris, seeing the sights and viewing great artworks with Svetlana, before she flies on to Budapest and to Ivan.

Selin meets Ivan, who drives her to have a barbecue with his school friends; she instantly finds them rude and dislikable, and begins to see Ivan differently. Late that night, Ivan tries to drop her back at the teachers’ apartments, but they cannot get in; instead, he spends the night at his family home, where she meets his family the next day. Selin briefly sees the sights of Budapest with her fellow English teachers, before they head out into the country and are posted to various villages. Feeling alone, Selin comes to wonder how she ended up in Hungary at all. However, she is liked as a teacher and is popular amongst the villagers, who include eccentrics such as Reni, a woman with a very young boyfriend who takes her to see the natural history museum, and Rózsa, a Hungarian teacher of English who is fond of Selin but talks very bluntly to her, dubbing her “idiotic.”

As the weeks pass, Selin does not call Ivan until his friend Peter tells her to do so. They arrange to meet, and they go canoeing along the Danube, briefly getting lost. Selin spends another night at his house, and this time they agree to talk about their relationship in detail: each will ask a question, and the other must answer honestly. Though they overcome the breakdown in their communication, Selin discovers once and for all that Ivan has no plans for her in his future; he is still with Eunice, and still plans to move to California. She realizes that, despite never properly being together and never having kissed, they are breaking up.

Back at the Hungarian village, Selin is able to move past her feelings whilst she makes the final arrangements for the summer: a brief summer camp, a fashion show, and plays put on in English by the students. She says a heartfelt goodbye to Rózsa and the other teachers, and flies to Istanbul to meet her mother and her four aunts. In Istanbul her emotions finally catch up with her, and she falls sick for several days. However, she reflects that despite not having Ivan she still feels a sense of optimism when thinking about the future, and her return to university. The novel ends with Selin looking forward to her possible future as a writer, and concludes with a comment on how she decided to quit studying language for good.

More summaries and resources for teaching or studying The Idiot: A Novel.

The Idiot: A Novel from BookRags. (c)2022 BookRags, Inc. All rights reserved.