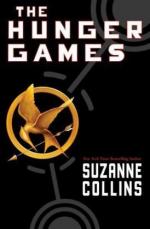 Suzanne Collins
This Study Guide consists of approximately 50 pages of chapter summaries, quotes, character analysis, themes, and more - everything you need to sharpen your knowledge of The Hunger Games.

This detailed literature summary also contains Topics for Discussion and a Free Quiz on The Hunger Games by Suzanne Collins.

The Hunger Games is the story of post-apocalyptic North America, now renamed Panem and divided into twelve Districts. These Districts have specific tasks that contribute to the overall well-being of the empire. Panem is controlled by the Capitol, a city with abundant resources that keeps the other Districts under its boot. Katniss Everdeen, her sister Prim, and her mother live in District Twelve, the coal mining district. Katniss has been responsible for feeding her family ever since her father died when she was eleven. The twelve Districts are required each year to participate in the Hunger Games, a punishment for a long-ago rebellion. For the Games, each District must send two children between the ages of twelve and eighteen to compete to the death. They fight in an arena designed by the Gamemakers, and the whole event is for people's entertainment. Katniss is worried that she or her friend Gale's names may be drawn to compete, but she is shocked when her younger sister Prim's name is called. To save Prim, Katniss volunteers to go in her place. The other tribute from District Twelve is the baker's son, Peeta. Katniss has complicated feelings toward Peeta because as children, at risk of punishment, he gave her some bread when her family was starving.

To prepare for the Hunger Games, Katniss and Peeta are groomed by a prep team including their mentor Haymitch, their sponsor Effie Trinket, and their stylists Cinna and Portia. During the Opening Ceremonies, Katniss becomes known as the girl who was on fire, thanks to Cinna's costume. Peeta reveals his crush on her to the world, and while she thinks it is a gimmick, he truly has feelings for her that he makes clear throughout the Games. Katniss always tries to fight fairly in the arena, even befriending a twelve-year-old named Rue who reminds her of her younger sister. They face constant danger in the arena, both from the Gamemakers and from fellow tributes. Though at first Katniss thinks Peeta is working against her, it eventually becomes clear that he has been trying to protect her, and when the Gamemakers change the rules so that two tributes from the same district can win, she sets off to find him. He is dying, but she is able to get the medicine he needs and saves him. Once they are a team it is easier for both of them to get gifts from their sponsors because they pretend to be in love. They finally go back to the lake to satisfy the Gamemakers' need for a showdown, but are horrified and surprised at the vicious genetically altered mutations that represent the dead tributes. At the last moment, the Gamemakers try to pit them against one another, but Katniss and Peeta's willingness to die for each other cause them to declare both victors. They are ecstatic to go home, but Katniss is distressed when she realizes Peeta's feelings are real—he has not been pretending for the audience at all.

More summaries and resources for teaching or studying The Hunger Games.