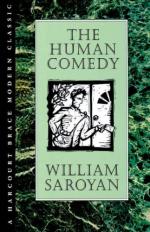 William Saroyan
This Study Guide consists of approximately 41 pages of chapter summaries, quotes, character analysis, themes, and more - everything you need to sharpen your knowledge of The Human Comedy.

This detailed literature summary also contains Topics for Discussion on The Human Comedy by William Saroyan.

This novel, set in a small American town during World War II, is a coming of age story anchored by the experiences of Homer Macauley, a teenage telegraph messenger who discovers truths about human experience in general and about himself in particular while delivering telegrams, many of which report on the deaths of loved ones. Episodic and poetic, with an emphasis on creating a portrait rather than developing a plot, The Human Comedy explores themes relating to the existential, essential loneliness of human existence and the different ways human beings strive and struggle to keep that loneliness at bay.

The novel begins with a simple experience of joy: on a warm, bright afternoon, Ulysses Macauley, younger brother of the novel's protagonist, enjoys experiences of animals in his back yard, a friendly man on a train, and his mother's company. Soon afterwards, however, his older brother Homer, on one of his earliest deliveries as a telegraph boy, passes on news of her son's death to a suddenly (and perhaps understandably) traumatized middle-aged woman.

On their journeys throughout their hometown and through the next couple of days, Homer and Ulysses both encounter vividly portrayed characters who, one way or another, educate them about the ways of the world. At the telegraph office there's the selflessly compassionate Mr. Spangler and the aged, weary, fragile Mr. Grogan. At home, there's the gently grieving (and profoundly wise) Mrs. Macauley and oldest sister Bess who, with her friend Mary Arena, takes pity on a visiting trio of soldiers and joins them on a date at the movies.

Then there are the two very different shop owners, the worldly and infinitely generous Mr. Ara and the less worldly, more selfish Mr. Covington, and a wide selection of characters at Homer's school. In terms of teachers, there's Mr. Byfield (the manipulative athletic coach), Miss Hicks (the spinster teacher with a surprising perspective on detention) and Mr. Ek (the principle, more interested in doing the right thing than in being popular with either his faculty or the parents). In terms of classmates, Homer has encounters with the well-off Hubert, the beautiful but aloof Helen, and the amusing Joe. There are also telling glimpses of a couple of outsiders (word traveler Rosalie Sims-Pibity and the mysterious, chilling Mr. Mechano), several townspeople (including the taciturn Big Chris, the flamboyant Diana Steed and the amused Mr. Henderson, who lets Auggie and his friends steal apricots from his tree. Most importantly, there are the absent members of the Macauley family - elder son Marcus (engaged to Mary Arena and about to go fight in the war) and the dead Mr. Macauley, who visits his wife as a ghost, offering compassion and warnings of a future in which Marcus is killed.

Several times in the book, narration and characters both comment on an essential loneliness at the core of human existence in general and of every individual life. There are also several portrayals of how various characters act on their belief that a powerful way to combat that loneliness is to act selflessly and with compassion. There are also several suggestions that faith, specifically the Christian faith, is also a powerful weapon in that particular fight.

Through all of this, Homer Macauley essentially becomes a man - not physically, as he's some time away from going through puberty, but emotionally and spiritually, with a lived awareness of what it takes or costs to live and die in this world. The biggest test comes when he is given a telegram to deliver to his own home - a telegram announcing Marcus's death. The day the telegram comes, however, there is another arrival - Marcus's best friend in the army, a man who grew up without family and, as a result of hearing Marcus's stories, came to think of the Macauleys as his family. The novel concludes with the grieving Macauleys smiling through their tears and welcoming the young soldier, Tobey George, into their home.

More summaries and resources for teaching or studying The Human Comedy.