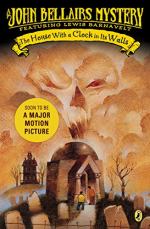 The House With a Clock in Its Walls Summary & Study Guide

John Bellairs
This Study Guide consists of approximately 53 pages of chapter summaries, quotes, character analysis, themes, and more - everything you need to sharpen your knowledge of The House With a Clock in Its Walls.

The House With a Clock in Its Walls Summary & Study Guide includes comprehensive information and analysis to help you understand the book. This study guide contains the following sections:

This detailed literature summary also contains Quotes and a Free Quiz on The House With a Clock in Its Walls by John Bellairs.

The following version of the book was used to create this study guide: Bellairs, John. The House With a Clock in Its Walls. Puffin Books, New York, New York, 1993. Kindle AZW file. (Note that an earlier version of this book was published by Dial Press in 1973.)

Lewis Barnavelt is a 10-year-old boy who moves in with his Uncle Jonathan after Lewis's parents die in an accident. Lewis quickly feels at home with his uncle, and the next-door-neighbor named Florence becomes the best friend of Lewis. Lewis is in the house only a short time when he learns that Jonathan and Florence are both magical and that they have a mystery on their hands. From anywhere in Jonathan's house, they can hear a ticking clock. It sometimes ticks faster and sometimes more loudly, but it never stops. They cannot find the source and do not know the meaning, but Jonathan believes it has something to do with the previous owners of the house, Isaac and Selenna Izard, who both had magical powers.

Lewis quickly forgets this mystery as he struggles with the details of his own life. He is beginning a new school, but he is having the same problems that have always followed him. He is overweight and performs poorly at sports. Thus, he is unpopular among his peers. When a very popular boy named Tarby seems to befriend Lewis, he becomes determined to do anything in order to keep Tarby's interest. He invites Tarby over for an evening, and Jonathan causes the moon to eclipse during the visit. Later, Lewis discovers that Tarby told his father about the evening, though Lewis had asked him not to do so. When Tarby begins to show more signs of losing interest in Lewis, Lewis wildly makes the claim that he will raise someone from the dead.

Meanwhile, there is a ticking in the walls at Jonathan's house that no one can identify. They cannot find the source and Jonathan tends to hide the sound by having dozens of clocks spread around the house. Jonathan reveals that Selenna and Isaac Izard were the previous owners and they were involved in evil magic.

On Halloween night, Lewis meets Tarby at the cemetery and inadvertently chooses the tomb of Selenna Izard for his first effort at raising the dead. He succeeds but Tarby brushes away the scene, saying it was probably a trick of the moonlight. Jonathan's neighbors move away under mysterious circumstances and Lewis soon discovers the new neighbor is Selenna in disguise. He confronts her and Florence steps in, saving Lewis and buying them some time. Lewis finds manuscripts written by Isaac, and they learn that the clock is actually supposed to count down to the end of the world, but Selenna is the only one who can perform the final step to make the clock work. Together, Lewis, Jonathan, and Florence find the clock but it is Lewis who is able to destroy it and Selenna in one blow. Lewis settles in to his life with Jonathan and Florence, and reveals that he has made a new friend, a girl who knows all about cannons.

More summaries and resources for teaching or studying The House With a Clock in Its Walls.

The House With a Clock in Its Walls from BookRags. (c)2022 BookRags, Inc. All rights reserved.