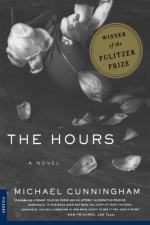 Get The Hours from Amazon.com
View the Study Pack
View the Lesson Plans
Study Guide
Order our The Hours Study Guide

Related Topics
The Snow Queen
A Wild Swan: And Other Tales
Specimen Days

Michael Cunningham
This Study Guide consists of approximately 42 pages of chapter summaries, quotes, character analysis, themes, and more - everything you need to sharpen your knowledge of The Hours.

The Hours Summary & Study Guide includes comprehensive information and analysis to help you understand the book. This study guide contains the following sections:

This detailed literature summary also contains Topics for Discussion and a Free Quiz on The Hours by Michael Cunningham.

The novel opens with a vivid description of Virginia Woolf's suicide. The plot then moves through time and space to intertwine the lives of three women: Woolf, Laura Brown (an unhappy housewife), and Clarissa Vaughan (the modern-day Mrs. Dalloway). As we switch back and forth between these three women's stories, we experience their lives as told through the events in a single day.

Virginia Woolf's day begins with her writing her new novel, Mrs. Dalloway, and nearly ends with a possible suicide attempt, averted at the last moment by her husband Leonard.

Laura Brown, whose day takes place nine years after Woolf's actual suicide, is the reader of Virginia's book, Mrs. Dalloway, and a fellow candidate for suicide. Her thoughts of suicide that day are also diverted, although we learn from the third storyline (Mrs. Dalloway's/Clarissa Vaughan's) that she later chose to abandon her family instead of committing suicide.

Clarissa Vaughan, who is based on the character created by Virginia Woolf, was nicknamed "Mrs. Dalloway" by her lover, Richard. Richard, we ultimately learn, was Laura Brown's abandoned son. He witnessed her suicidal tendencies, lived through her abandonment, and when we catch up with him in the present day, he is a tortured artist, dying of AIDS. Clarissa is planning a party to honor Richard, the dying writer, for winning the Carrouthers Prize, which he is scheduled to receive that night. Clarissa's day reflects the plotlines and events which Virginia Woolf wrote about in Mrs. Dalloway. However, Woolf's book ends with Clarissa Dalloway's party. In The Hours, Clarissa Vaughan's day ends with a suicide, instead. Richard tells her he won't be able to attend her party after all, moments before plunging to his death in a suicide leap from a fifth-story window. As Virginia Woolf herself decided while writing Mrs. Dalloway, the tortured artist character must die; with his sacrifice, Clarissa Vaughan/Mrs. Dalloway is allowed to go on living.

More summaries and resources for teaching or studying The Hours.

The Hours from BookRags. (c)2022 BookRags, Inc. All rights reserved.