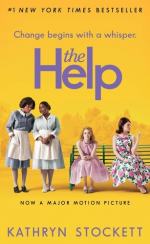 Get The Help from Amazon.com
View the Study Pack
View the Lesson Plans
Study Guide
Order our The Help Study Guide

Kathryn Stockett
This Study Guide consists of approximately 40 pages of chapter summaries, quotes, character analysis, themes, and more - everything you need to sharpen your knowledge of The Help.

The Help Summary & Study Guide includes comprehensive information and analysis to help you understand the book. This study guide contains the following sections:

This detailed literature summary also contains Topics for Discussion and a Free Quiz on The Help by Kathryn Stockett.

"The Help" written by Kathryn Stockett is a work of fiction. The book tells the story of Jackson, Mississippi in the early 1960s, starting in 1962 and ending in 1964. These are turbulent times for the entire country but especially turbulent for the people in Jackson, who are being forced to face up to their old ways - ways that are no longer acceptable to many. For the most part those ways revolve around segregation and the mistreatment of the Negroes that live and work in a white man's town.

The first to be introduced is Aibileen Clark, a 53 year old woman that has been in service nearly her entire life. Aibileen works for the Leefolt family, run by Elizabeth Leefolt. Aibileen takes care of Mae Mobley Leefolt, a two year old girl that is neglected by a mother that does not pay attention to or care for her own child. Aibileen will raise the child, just like she has raised 17 others.

Minny Jackson is the next to be introduced. Minny is a sassy, loud, irritable black woman that works for Hilly Walters Holbrook. Minny is the best cook in town but talks back to the Holbrooks enough to get her fired. Minny gets revenge on Hilly which haunts her until the end.

The next person to be introduced is Eugenia "Skeeter" Phelan. Skeeter is best friends with Hilly Holbrook and Elizabeth Leefolt. The 23 year olds have been friends since childhood and have remained close although Skeeter is fading away from the lifestyle she once knew. Skeeter wants to be a writer more than anything but quickly learns that she is sorely under qualified for the position she applied for at Harper and Row, the famous New York publishing house. Skeeter does get advice from an editor at Harper and Row and runs with it. Mrs. Stein, the editor, tells Skeeter to write about something that disturbs her. That is what makes writing good. Skeeter begins to write about the help - the Negro servants in every white household in Jackson and across most of the South.

Skeeter is on a mission to interview maids to find out what their lives are like working for white people. Skeeter is truly interested in knowing their stories and sharing them with the world. The first person Skeeter interviews is Aibileen. Aibileen is reluctant at best but agrees to help Skeeter with the project. The relationship grows between the two women until they become good friends. Minny is the next person to come on board to work on the project. Soon the story becomes a book and Skeeter struggles to get people to help amid all of the turmoil happening around them, including the deaths of Medgar Evers and JFK.

Things in Skeeter's life are not a bed of roses, either. Her mother is dying, her prominent boyfriend withdraws his marriage proposal and Skeeter learns that her maid and lifelong friend has died.

When the book hits the stores the town is in an uproar. Soon, everything changes. Aibileen is fired, Minny might be leaving her abusive husband, and Skeeter accepts a job in New York. A real hornet's next has been stirred up by these brave women and Jackson will never be the same.

More summaries and resources for teaching or studying The Help.

The Help from BookRags. (c)2022 BookRags, Inc. All rights reserved.