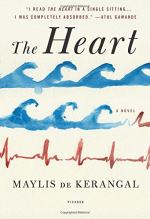 Get The Heart from Amazon.com
View the Study Pack
Study Guide
Order our The Heart Study Guide

Maylis de Kerangal
This Study Guide consists of approximately 52 pages of chapter summaries, quotes, character analysis, themes, and more - everything you need to sharpen your knowledge of The Heart.

The Heart Summary & Study Guide includes comprehensive information and analysis to help you understand the book. This study guide contains the following sections:

This detailed literature summary also contains Quotes and a Free Quiz on The Heart by Maylis de Kerangal.

The following version of this book was used to create this study guide: de Kerangal, Maylis. The Heart. New York: Farrar, Straus and Giroux, 2016.

The novel begins with 19-year-old Simon Limbres of Le Havre (a community in Normandy) taking a surfing trip with his two best friends, Christophe and Johan. As the boys drive home afterwards, Christophe drives off the road and strikes a pole, throwing Simon from the van. Emergency services arrive and take Simon to the hospital.

At the hospital, Dr. Révol, the head of the ICU, runs various tests on Simon and determines he is in a state of coma dépassé – brain death. Simon's mother Marianne arrives, and shortly thereafter she is joined by his father, Sean, from whom she is separated. The Limbres do not grasp the gravity of the situation at first, asking if he will wake from his coma. Dr. Révol states that he will not, he is medically dead. Next, Dr. Révol's colleague, a nurse named Thomas Rémige is called in to speak to Marianne and Sean about the possibility of donating Simon's organs. They are reeling from grief and Sean is angry at the suggestion, but they ultimately acquiesce. Marianne asks Thomas to talk to Simon at the moment his heart is stopped during the operation to remove his organs, to tell him that his family is there with him, and to play the sound of the ocean on an iPod for him. Thomas agrees. He is emotionally drained after this conversation, concerned that he has talked them into something they did not truly wish to do. Another colleague, nurse Cordélia Owl is repeatedly distracted from the drama at hand by thoughts of her lover, who has not called her after they spent the previous night together. Elsewhere, in her apartment, Simon's girlfriend Juliette recalls quarreling with him over the surfing trip and expects that he will call her soon.

Thomas sends Simon's chart to the Biomedical Agency, the next step in a long and complicated procedure that must be performed in accordance with strict temporal guidelines. The chart is received by Marthe Carrare at the National Center for the Allocation of Transplants in Paris. She reviews the information and sends it to Dr. Harfang at Pitié-Salpêtrière Hospital. Dr. Harfang is a member of a family dynasty of doctors featuring “five generations of pulmonologists” (153).

Marianne and Sean return to Marianne's apartment and realize they must still tell Simon's seven-year-old sister Lou and his girlfriend Juliette about the accident. Dr. Harfang calls one of his patients, Claire Méjan, to inform her that he has a heart for her. Claire is suffering from advanced heart disease, and she has been living (unhappily) in an apartment across the street from Pitié-Salpêtrière since she was diagnosed several months prior.

In another Parisian apartment, a young surgeon named Virgilio Breva is called by Dr. Harfang and told he must go to Le Havre to pick up Simon Limbres' heart. He takes Dr. Harfang's daughter Alice, an intern at the hospital, with him. The removal of the heart goes exactly according to plan, and Thomas pauses the procedure in order to tell Simon that his loved ones are with him and to play the ocean sounds on the iPod. Virgilio and Alice bring the heart back to Paris, where Harfang transfers it into Claire Méjan's body. Back in Le Havre, Thomas carefully and respectfully cleans Simon's body and sews him up so that he will be presentable to his family. Simon is compared to a hero from Greek mythology. Simon's heart begins beating in Claire's body, and Virgilio asks Alice out for a drink. It is 5:49 a.m., almost 24 hours exactly from the moment the novel started.

More summaries and resources for teaching or studying The Heart.

The Heart from BookRags. (c)2022 BookRags, Inc. All rights reserved.