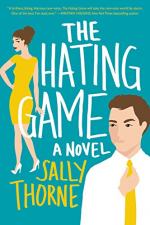 Sally Thorne
This Study Guide consists of approximately 36 pages of chapter summaries, quotes, character analysis, themes, and more - everything you need to sharpen your knowledge of The Hating Game.

This detailed literature summary also contains Quotes and a Free Quiz on The Hating Game by Sally Thorne.

The following version of this book was used to create this study guide: Thorne, Sally. The Hating Game. New York: Harper Collins, 2016.

Sally Thorne’s The Hating Game begins with Lucy Hutton, the narrator, telling us how much she hates Joshua Templeman. Lucy works as the executive assistant for Helene Pascal, the co-CEO of Bexley and Gamin, a publishing house that had once been two. Originally, Gamin had been a small independent publisher, but it had merged with the corporate Bexley so that both houses could survive the recession. When the two merged, they moved into a new building where Mr. Bexley and Helene shared the top floor behind closed doors. In the lobby, which was made entirely of reflective surfaces, Lucy sat across from Mr. Bexley’s executive assistant, Joshua Templeman. The two of them played immature and unprofessional games with one another all the time, and Lucy did not do anything at work without turning it into a competition with Josh, who she thought of as her nemesis.

When Mr. Bexley and Helene announce that they are creating a new position, chief operating officer, they both want their own executive assistant to fulfil the position. Lucy begins competing even harder with Josh, but then she has a sexual dream about him. She wears a short dress to work the next day in order to get a reaction out of him, then lies and says she is wearing it because she has a date. He does not believe her, so she goes downstairs and asks Danny, a designer, to go out with her. That night, Josh insists on driving her to her date, and he kisses her in the elevator. She is shocked to find she very much enjoys it, but she goes on her date with Danny anyway, and is furious with Josh for ruining her night.

Josh and Lucy plan a corporate bonding exercise together at a paintball field. Lucy feels sick, but she powers through the day. By the end, she is vomiting. Josh sits with her on the bus back and then takes her home. He stays the night with her and even calls his doctor brother over to check on her. They talk and become vulnerable and open with one another for the first time. In the morning, Lucy feels embarrassed, so she kicks Josh out without thanking him.

On Monday, Danny brings her daisies and offers to give her a ride to work. He comes in with her, and Josh, who has left a rose on Lucy’s desk, is furious. Lucy apologizes and tells him she will go to his brother’s wedding with him to be his designated driver. They go into a janitor’s closet together and kiss, then decide that they want to try having an intimate relationship with one another, but Josh insists that Lucy has to go out with Danny and kiss him before, so she can decide who she likes better.

Lucy goes out with Danny and kisses him, but there are no sparks. She drives to Josh’s house and he invites her in. She snoops through his things and they hold hands, but he says they cannot have sex yet. The next day, Josh does not come to work. Lucy goes to his house afterwards and he makes her dinner and they make out on the couch until he sends her home. The next day, they go to work and get in a fight when Josh makes a comment about the interviews that makes Lucy feel competitive.

On Friday, Josh has a fight with Mr. Bexley before he and Lucy leave to drive to the wedding, but he does not tell her what it was about. They drive to the wedding and warm back up to one another. Lucy is under the impression Josh does not want to be there because of his father, who he does not get along with, but she finds out that Josh used to date the bride, Mindy. Lucy thinks he only brought her to the wedding to impress his ex, but Josh promises that is not the case. They have sex that night, and in the morning Lucy watches Josh’s father berates him. She stops him and defends Josh. They drive off together and Lucy realizes she is in love with Josh. They go upstairs and admit their feelings for one another.

More summaries and resources for teaching or studying The Hating Game.