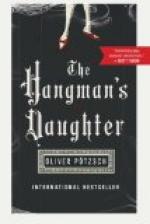 Magdalena has been left with two soldiers who have been drinking for hours. The two soldiers finally get tired of waiting for the devil to return. They decide they no longer care what the devil said and attack her. Magdalena, however, has managed to free her hands and run when the soldiers come for her.

Jakob Kuisl slips into the chamber where Simon waits with the orphans. Jakob tells Simon of his fight with the devil and that he left him in the upper chamber in an unknown condition. They decide they must get the children out quickly. They find a tunnel that has partially collapsed and begin digging it out. As they work, Sophie tells them how she and her friends were in their hideout when they came out and overheard a Schongau man telling...

(read more from the Chapters 15-16 and Epilogue Summary)