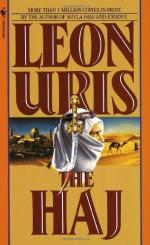 The Haj Topics for Discussion

What is symbolized by the jeweled dagger that is mentioned in the Prelude?

What were the issues regarding immigration to Palestine?

What was the Haganah? What was its purpose?

Why was Palestine the twice-promised land? How did this situation arise?

How did British policy at the end of World War II contribute to the Jewish uprising?

What was the significance of Ibrahim's being summoned to Damascus for a meeting with Kabir, Heusseini and Kaukji?

How did the camps form? Was it the result of the Arabs or the Jews?

What was the significance of Jamil and his death?

What was the role of custom in Arab society? How did it affect Ibrahim's family?

The Haj from BookRags. (c)2023 BookRags, Inc. All rights reserved.