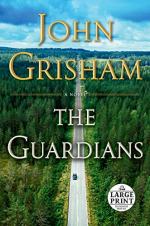 Related Topics
A Time to Kill
John Grisham
The Brethren
The Broker
The Chamber
The Client
The Firm
The Last Juror
The Pelican Brief
The Racketeer
The Rainmaker
The Runaway Jury
The Testament
Sycamore Row
Gray Mountain
The Whistler
Camino Island
The Rooster Bar
The Reckoning: A Novel
The Innocent Man
The Summons
Witness to a Trial
Camino Wind
A Time For Mercy
Sooley
Calico Joe
The Judge's List
Sparring Partners
The Boys from Biloxi

John Grisham
This Study Guide consists of approximately 76 pages of chapter summaries, quotes, character analysis, themes, and more - everything you need to sharpen your knowledge of The Guardians.

The Guardians: A Novel Summary & Study Guide includes comprehensive information and analysis to help you understand the book. This study guide contains the following sections:

This detailed literature summary also contains Quotes and a Free Quiz on The Guardians: A Novel by John Grisham.

The following version of the novel was used to create this study guide: Grisham, John. The Guardians. Doubleday, October 15, 2019. Kindle.

In John Grisham's novel The Guardians, innocence lawyer Cullen Post knows that it is more difficult to get an innocent man out of jail than it is for a man to be wrongly convicted. However, he does not anticipate all that will come against him when he decides to take on a case for Quincy Miller, a man Post believes was framed for the murder of a small-town lawyer. Post finds himself up against a drug cartel, a prison gang, and even a voodoo priestess as he fights for Miller’s exoneration.

Post’s story begins as he waits for a last-minute stay of execution for Duke Russell, a man wrongly accused of the rape and murder of a young woman. Duke is granted his stay just as his last meal arrives, less than two hours before he is scheduled to be executed. As Post leaves the jail in which Duke is incarcerated, he remembers the eight clients he has been able to exonerate, along with the one client who could not be saved. Post believes it will take a miracle to save Russell.

Meanwhile, Post decides to take up the cause of Quincy Miller, a man Post has decided was framed for the murder of Keith Russo, a lawyer in a small Florida town. In his preliminary research into the case, Post discovers that a flashlight, a key piece of evidence in the case, is believed to have been destroyed in a fire. To make matters worse, Post talks to Tyler Townsend, the lawyer who defended Quincy in the original trial. Tyler tells Post that while he was preparing to appeal the original conviction, he was abducted during a trip to Belize. Tyler was tortured and made to watch two other men eaten alive by crocodiles as a warning for him to leave Quincy’s case alone. As a result of his experience, Tyler believes it was a powerful drug cartel who is covering up the identity of the real killer in the case. He warns Post not to get involved.

Post does not allow Tyler’s story to scare him away from Quincy’s case but soon wishes that perhaps he had when Quincy is almost killed when he is accosted and beaten by two members of a white jailhouse gang. Doctors give little hope that Quincy will survive but he begins to slowly improve. Post bribes a guard who works at the prison where Quincy was beaten to find out the identities of those involved in hurting Quincy. The guard identifies two convicts as well as a guard.

Post and his fellow employees at Guardian Ministries get a lucky break when Len Duckworth, a former DEA agent, tells them that Russo was killed because he was working as an informant for the DEA. With that information serving to prove that the attempt on Quincy’s life was a contracted hit, Post manages to get the FBI involved in the case. Using the prison guard who served as the lookout during Quincy’s beating as an informant, the FBI manages to connect Bradley Pfitzner, the sheriff of Ruiz County when Russo was murdered, to the hit on Quincy.

It had long been believed that Pfitzner was involved in the drug trafficking business and had perhaps covered something up in Russo’s murder. Post suspects Pfitzner was the one who planted the flashlight, the only piece of evidence that connected Quincy to the murder, in Quincy’s car and then arranged for that piece of evidence to disappear. Post also becomes aware of a rumor indicating that Post had his men ambush and murder a black deputy, Kenny Taft, because Taft had information about Russo’s murder.

Post contacts some of Kenny’s relatives on the hunch that Kenny might have hidden some evidence boxes he took from the sheriff’s department in the family’s old abandoned homeplace. Post is shocked to learn the family does not want the house disturbed because they believe the house was cursed by Vida Taft, a voodoo priestess, after her family members had her committed to an asylum. The family’s fear of the curse seems to fade, however, when Post offers them money in exchange for entrance into the house. Post does find three boxes of evidence in the attic.

Meanwhile, in Duke’s case, Post was forced to fight with Chad Falwright, the small-town prosecutor who did not want to see his victory in Duke’s case nullified. Chad fights Duke’s exoneration by refusing to have the seven pubic hairs taken as evidence in the case DNA tested. Post’s miracle comes when a substitute judge works the case in which Post appeals the decision not to test the hairs for DNA. This judge orders the testing to be done and even has her order expedited. The results indicate that Duke was not responsible for the murder and he is exonerated.

In Quincy’s case, Post realizes how close he is to getting Quincy exonerated when the evidence boxes are opened and one of them contains the flashlight from Russo’s case. It is sent for testing. The blood on it, believed to be back-splatter from where Quincy shot Russo with a shotgun, is determined not to be human blood. Because Quincy is about to be dismissed from the hospital, Post and his team must work quickly to ensure that he does not get sent back to the prison where he was almost killed. They take a chance and file their petition for post-conviction relief in the county where Quincy has spent almost nineteen weeks in the hospital instead of the county where he was imprisoned.

Although the Florida Supreme Court denies the motion, a judge who is interested in Quincy’s story picks up the case and hears an appeal by Guardian Ministries. This judge agrees to hear the new evidence in the case. When he exonerates Quincy, the judge seems to be overjoyed that he was able to be part of the team that freed an innocent man.

More summaries and resources for teaching or studying The Guardians: A Novel.

The Guardians: A Novel from BookRags. (c)2022 BookRags, Inc. All rights reserved.