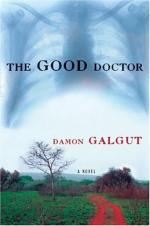 This detailed literature summary also contains Topics for Discussion and a Free Quiz on The Good Doctor by Damon Galgut.

The Good Doctor is set in a neglected, deserted, ill-supplied and crumbling rural hospital. The hospital is in the predominately poor, black section of post-apartheid South Africa which was previously called the homelands. The book opens with the arrival of Dr. Laurence Waters who is a recent medical school graduate with high ideals and a need to "make a difference." The initial and prophetic pronouncement made upon him by Dr. Frank Eloff a disillusioned veteran physician is that Dr. Walters won't last.

There is a minimal staff at the hospital. In addition to Frank there is only; Dr. Ngema, the administrator and head surgeon; the Santanders, a couple of doctors originally from Cuba; and Tehogo, who does the work of both a nurse and an orderly, but without proper qualifications. Dr. Ngema has been at the hospital many years, awaiting her 'promotion' to a job at a larger, better facility in the city. Frank originally came to this post as her replacement, but when her promotion fell through and she stayed, Frank also stayed on to await her eventual exit. The staff is an interesting cast of misfits; Dr. Ngema whose medical skills are fading professes a desire for change but is constantly working against change; The Santanders who are both miserable and fight constantly with each other; Tehogo who is sullen, mysterious and a bit threatening; and Frank who is apathetic, weak, bitter and pessimistic.

Dr. Laurence Waters joins this mixture of personalities as an idealistic agent of change with little wisdom and no tact. Laurence is shocked at the condition of the hospital which is literally falling apart. The hospital has little furniture, because it has been looted. Lawrence is also surprised at the lack of patients. The doctor has come to the hospital to do meaningful work and to make a difference but there are few patients in the hospital. Of the few patients that are in the hospital, the ones with anything but the most minor complaints must be referred to the "big" hospital in the city due to the lack of supplies and equipment in his hospital.

Eventually Laurence comes up with a plan to hold clinics in nearby villages both to minister to the people and to make them aware of the existence of the hospital. The entire staff is skeptical about Lawrence's idea, but they do hold the first clinic which is such success that it brings renewed optimism to the hospital staff.

A second clinic is planned, but never happens because a chain of tragic events unfolds, beginning with the shooting of Tehogo and ending with the demise of both him and Laurence.

The two protagonists, Frank and Laurence, oppose one another and yet in many ways they are very similar. Frank's pessimistic resignation and wasted potential clash with Laurence's almost other-worldly idealism and his drive to do good. Laurence is often forces Frank to face his many demons. Laurence also reminds Frank of what he is not. For both of these reasons, Frank resents him. Both of the doctors have dysfunctional love lives. Frank, having lost his wife to his best friend and business partner, now restricts his involvement with women to primal sex with Maria, a village woman who owns the souvenir shop. Although Maria is the name she gives Frank, it is not her real name. Laurence is involved with Zanele, an American who changed her name from Linda in order to adopt a more 'African' identity for her work in the villages. The only thing she and Laurence have in common is their idealism and, after an awkward visit to see him at the hospital, Zanele ends their relationship.

In the end; Dr. Ngema gets her transfer to the big hospital; Frank takes over her post; Claudia Santander leaves her husband and returns to Cuba; Tehogo and Laurence are kidnapped by hostile forces and are presumed dead which fulfills Frank's prophecy. As The Good Doctor comes to an end, people have come and gone, but nothing has changed, nor do we feel that it will. Laurence's idealism has been swallowed up in reality and once again, it is Frank who survives.