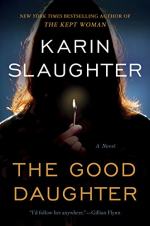 Slaughter, Karin
This Study Guide consists of approximately 98 pages of chapter summaries, quotes, character analysis, themes, and more - everything you need to sharpen your knowledge of The Good Daughter.

This detailed literature summary also contains Quotes and a Free Quiz on The Good Daughter by Slaughter, Karin.

The following version of the novel was used to create this study guide: Slaughter, Karin. The Good Daughter. William Morrow, April 17, 2018. Kindle.

In The Good Daughter by Karin Slaughter, Charlie and Sam Quinn’s lives changed forever when their mother was murdered and Sam was shot in the head. One man responsible for the tragedy was on death row while the other was dead, shot by police because he drew a gun when an officer tried to arrest him. A school shooting 28 years later set in motion a series of events that brought estranged sisters Charlie and Sam back together. Sadly, their father, Rusty, died as a result of stab wounds he received because he agreed to represent the girl responsible for the shooting. After Rusty’s death, Charlie was finally able to tell Sam the truth about what happened the night their mother was killed. Additionally, they learn that there was more to the attack, things that their father had kept secret from them.

The story of the day in 1989 when Gamma, Charlie and Sam’s mother are murdered and Sam is shot in the head and buried alive, is told from the perspective of Sam. The timeline moves forward to 2017 when Charlie was at Pikeville Middle School to return a cell phone to Mason “Huck” Huckabee, a man with whom she had a one night stand. While she was at the school, Charlie was caught up in a school shooting. The principal, as well as an eight-year-old girl, were killed.

After Charlie left the police station where she had been questioned, Rusty, a defense lawyer, asked her to go and pick up Kelly’s parents before police executed a search warrant on their house. Rusty had agreed to defend the shooter, eighteen-year-old Kelly Wilson. Charlie knew it would not make Rusty any less popular with the public than he already was for the various criminals he had defended through the years. Later that night, Charlie got word that her father had been stabbed and had been air-lifted to the hospital. Charlie has her husband, Ben, contact Sam to tell her that she needed her.

Even though Sam was not sure if it was wise to return to Pikeville after what had happened there, Sam did go back because her sister had asked for her. She and her sister attempted to reconcile but also fought when they unintentionally touched on raw subjects in each other’s lives. Because Rusty was in the hospital and Charlie was a witness to the shooting, Sam agreed to represent Kelly at her arraignment. In reality, she stayed because she sensed Charlie needed her for something more than just their father’s injury.

Although they had believed that Rusty would survive, he died as a result of his injuries. It was only after he was dead that Sam was able to confess to her sister that she was not the right choice to make a decision about Rusty’s medical care because she had not been able to let her husband die when he was clearly suffering from cancer. She had not wanted to let her husband go and believed she would have been the same way with her father. Charlie admitted to Sam that Zach had caught her as she tried to get help for Sam that night in 1989 and had raped her.

Hoping to get some closure on their father’s death, Sam and Charlie pay a visit to the farmhouse where the family was living when Gamma was murdered. There, they find another mystery in the form of an account with more than $300,000 from which Rusty had been making payments of $2,000 each month. Huck showed up at the farmhouse. Charlie tried to make him leave but he insisted that he had to talk to Charlie and Sam. At the same time that Huck was talking to Charlie and Sam, Ben found in Rusty’s safe a signed confession from Huck. It had been Huck and not the man who was shot by police who had been Zach’s accomplice the night that Gamma was murdered.

Ben attacked Huck for allowing Zach to rape Charlie. Huck did not fight back. After Ben exhausted his anger, Huck explained that his parents had paid off Zach to say that his brother, Daniel (who was believed to be with Zach and had been shot by police) really was his accomplice that night. The money was going to Zach’s son. The novel concludes with Charlie sending Sam a copy of a picture of their mother, one that Rusty said caught the moment she was falling in love with him.

More summaries and resources for teaching or studying The Good Daughter.