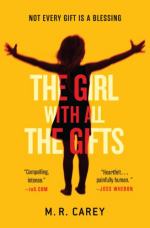 The Girl With All the Gifts Summary & Study Guide

M. R. Carey
This Study Guide consists of approximately 86 pages of chapter summaries, quotes, character analysis, themes, and more - everything you need to sharpen your knowledge of The Girl With All the Gifts.

The Girl With All the Gifts Summary & Study Guide Description

The Girl With All the Gifts Summary & Study Guide includes comprehensive information and analysis to help you understand the book. This study guide contains the following sections:

This detailed literature summary also contains Quotes and a Free Quiz on The Girl With All the Gifts by M. R. Carey.

Four unique individuals try to learn to co-exist after fate puts them together in extreme life-threatening circumstances in the novel “The Girl with All the Gifts” by M.R. Carey. Dr. Caroline Caldwell fights against time to try to find a cure or vaccine for a blood and saliva born fungus that is turning the human population into flesh eating disease carriers. She believes her ability to develop a cure lies in children like ten-year-old Melanie who are infected by the fungus but aren’t mentally impaired by it as many victims of the disease have become. As Melanie’s story develops, it turns out that Melanie does hold the cure for mankind, just not in the way that Caldwell imagined.

Melanie is among a group of children confiscated by the army for testing of a fungal disease that is wreaking havoc on the human population. In addition to physical testing, the children are also tested for emotional and mental prowess in a classroom setting where the children are given lessons, just like any other children. The difference is that Melanie and others like her must be strapped into high-backed metal wheelchairs in order to keep them from following the prompting of their disease and biting the teachers. Melanie’s favorite teacher is Helen Justineau. She treats the children like real children even though others at the army base treat them like test subjects. Sergeant Eddie Parks is cruel and resentful while Caldwell is interested only in being able to dissect the children’s brains so she can look at them under her microscope.

Everything changes one day when Caldwell requests that Melanie be sent to the lab for dissection. When Justineau discovers her favorite student is about to be killed, she hurries to the lab to try to intervene. During a standoff between Justineau and Caldwell as Melanie lies on the dissection table, the army base on which they live is attacked by junkers. These junkers, people who did not go to major cities for protection when the disease began but instead chose to take their chances on their own, have herded a large number of infected people, called hungries, to the perimeter of the base to overtake it. Only Melanie, Caldwell, Justineau, Parks and a young naive private named Kieran Gallagher manage to escape.

Although Parks stole a Humvee from the base, the rear axle breaks after only a few miles leaving the group with little food and no protection from the disease carrying hungries that fill the ruined lands between the base and Beacon, the closest city of refuge. These hungries track humans by the smell of their pheromones, movement, sounds and body heat. Parks, who has experience with the hungries, teaches the cohort how to best avoid the hungries. Even though he feels he is in charge of the group of civilians, he, Justineau and Caldwell bump heads often. Their major source of contention is Melanie’s role in the group. Park would be happy to let the child go free and no longer worry about her but his wish is disputed by both Justineau and Caldwell. Justineau sees Melanie as a child to whom they have a moral obligation to keep safe. Caldwell, on the other hand, believes Melanie is her property and must be kept with them because of Melanie’s value to her research.

As they make their way toward Beacon, Parks develops a new respect for Melanie as she saves their lives multiple times. Because Melanie carries the hungry fungus, she can move around the hungries without them noticing or bothering her. On one occasion she distracts the hungries from her friends so they can get away. At other times she acts as an advance scout for the group, leading them through areas where there is the least dense population of hungries. Gallagher even develops a liking for the girl as the two discover a world in which they’d never gotten to live.

As the novel reaches a climax, Melanie discovers a group of children hungries, like her, living in London. Afraid Caldwell will want to capture them and experiment on them Melanie tells Parks and the others that what she saw was a group of junkers. Fearing for his life, Gallagher takes out on his own and is tricked and killed by the child hungries. Caldwell traps one of these child hungries and uses it to prove there is no cure or vaccine that can be created to annihilate the fungus. Although she’d hoped to present her findings to a more prestigious audience, Caldwell knows she is dying of blood poisoning contracted through cuts on her hands during the attack on the army base. She presents her findings to Melanie. Meanwhile, Parks is bitten by one of the child hungries while trying to protect Justineau. He asks Melanie, once his enemy, to put him out of his misery before the disease completely took over his brain. Before doing so, Melanie has the sergeant help her with the flamethrowers on a tank-like vehicle they had commandeered. She directs him to set fire to a mass of dead, fruiting hungries. Melanie knows this will release spores of the fungus on the world, leaving the only people alive those who have been infected by the fungus.

Of the group that escaped the army base, only Melanie and Justineau survive. Because Justineau has not been infected with the hungry fungus, she must wear a protective suit whenever she goes outside the tank. Her life will not be boring, however, as Melanie has appointed her as the teacher of the group of hungry children who she discovered. This group of children represents the seed from which the Earth will be repopulated.

More summaries and resources for teaching or studying The Girl With All the Gifts.

The Girl With All the Gifts from BookRags. (c)2021 BookRags, Inc. All rights reserved.