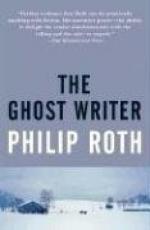 Philip Roth
This Study Guide consists of approximately 24 pages of chapter summaries, quotes, character analysis, themes, and more - everything you need to sharpen your knowledge of The Ghost Writer.

This detailed literature summary also contains Topics for Discussion and a Free Quiz on The Ghost Writer by Philip Roth.

The Ghost Writer is the eleventh novel by acclaimed writer Philip Roth. The novel tells the story of Nathan Zuckerman, a young writer at the beginning of his career who has sought out E.I. Lonoff, an established author who is just beginning to receive popular acclaim for his writings. Zuckerman comes to Lonoff looking for a mentor, placing Lonoff on a pedestal that makes the older man most uncomfortable. During his visit, Zuckerman meets another house guest of Lonoff's that causes his imagination to race with the possibilities that orbit this young beauty. The Ghost Writer is at times amusing, sad,and frustrating, placing art at odds with reality in a unique way that leaves the reader with something to think about long after the final paragraph is done.

Zuckerman arrives at Lonoff's house, excited just to be in the same room with his idol. The two discuss other Jewish writers, sharing opinions on literature and art as the afternoon quietly rolls away. As they talk, Zuckerman becomes aware of a beautiful young woman who is organizing papers in Lonoff's study. Zuckerman at first imagines this young woman is Lonoff's daughter or granddaughter, but soon learns that she is a former student. Lonoff, who teaches at a nearby university several times a week, sponsored the young woman to bring her to the United States from some unnamed location in Europe. Zuckerman becomes enchanted by the young woman even though they never share a word, and is disappointed to learn she will not be having dinner with them.

Over dinner, Zuckerman is pleased beyond words when Lonoff praises his few published pieces. However, dinner takes a turn downhill when Hope Lonoff, Lonoff's wife, begins to talk about how Lonoff has never done anything to make himself happy. Hope begins suggesting Lonoff should have an affair with Amy. When Lonoff refuses to acknowledge his wife's outrageous suggestion, she becomes angry and storms out of the room, leaving a broken dish behind.

After dinner, Lonoff invites Zuckerman to spend the night. When Lonoff goes up to bed, Zuckerman makes himself at home in Lonoff's study. As Zuckerman reads a Henry James story several times just because Lonoff made an offhand comment about it. At the same time, Zuckerman thinks about an argument he has been having with his father. Zuckerman wrote a short story about a fight over money a couple of cousins had a few years before. Zuckerman's father believes the story perpetuates a stereotype about Jews and has enlisted the help of a respected judge in their neighborhood to pressure Zuckerman into throwing the story away. Zuckerman is offended by this interference and attempt at controlling his career.

While Zuckerman is thinking about all this, Amy returns to the house. A few minutes later Zuckerman can hear arguing in the rooms above him. Zuckerman attempts to listen in, imagining Amy and Lonoff having an intimate discussion in her bedroom. Later, Zuckerman begins to imagine that Amy is Anne Frank. Amy survived the concentration camp where she was rumored to have died and has come to the United States to study under Lonoff in her aspiration to become a great writer. When the Diary of Anne Frank is published and later turned into a Broadway play, Amy becomes distraught, reading the book over and over, convincing herself that it is too late to let her father know she is still alive.

The following morning, Lonoff and his wife read Lonoff's fan mail to Zuckerman and Amy over breakfast. When Hope reads a letter from a young man asking Lonoff to sponsor him to come to the United States to study and become a writer, Hope attempts to apologize to Amy, believing the letter to have hurt her feelings in some way. Amy becomes upset even as she attempts to brush off the apology. Hope then begins her rant again, pushing Lonoff to become Amy's lover. Zuckerman imagines the two are already lovers. Hope then insists that Amy remain at the home with Lonoff while she will leave. Hope packs a bag and wonders out into the snow, determined to allow her husband and Amy to be alone. In the confusion of this argument, Amy leaves, leaving Zuckerman stranded.

More summaries and resources for teaching or studying The Ghost Writer.