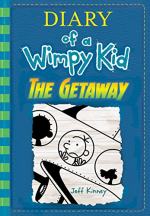 Jeff Kinney
This Study Guide consists of approximately 37 pages of chapter summaries, quotes, character analysis, themes, and more - everything you need to sharpen your knowledge of The Getaway.

The Getaway (Diary of a Wimpy Kid Book 12) Summary & Study Guide includes comprehensive information and analysis to help you understand the book. This study guide contains the following sections:

This detailed literature summary also contains Quotes and a Free Quiz on The Getaway (Diary of a Wimpy Kid Book 12) by Jeff Kinney.

The following version of this book was used to create the guide: Kinney, Jeff. Diary of a Wimpy Kid: The Getaway. Penguin Random House. 2017.

Diary of a Wimpy Kid: The Getaway tells the story of protagonist Greg Heffley going on a tropical vacation with his parents and his two brothers, which descends into chaos and mayhem as everything that can go wrong for the family does go wrong.

The story begins with Greg recounting the reason his parents wanted to go on vacation: they were worried about the stress of celebrating Christmas and thought it would be more fun to take their three sons to Isla de Corales, the tropical resort where they spent their honeymoon. Greg is unhappy about the suggestion but everyone else is enthusiastic.

The vacation gets off to a bad start when the family gets stuck in traffic on their way to the airport making them worry that they will miss their flight. After arriving later than they intended the Heffleys struggle to get through security and make it to their departure gate on time but, when they do arrive, their flight is delayed by several hours.

Once on the airplane, Greg becomes very worried about the possibility of a plane crash and asks the flight attendant lots of questions about the safety of the plane. The family takes it in turns to sit in First Class after Greg’s dad gets an upgrade but Greg misses his turn.

When they arrive at their destination Greg discovers that one of the activities at the resort is swimming with dolphins, which is something he has always wanted to do. He starts to think that the vacation might not be as bad as he was expecting. Greg’s parents’ want to stay in the same suite they stayed in for their honeymoon but they are told that they cannot because the resort has changed and is now split into two sides: the Mild Side, for families, and the Wild Side, which is for adults only.

In their suite, the Heffleys realize that they have collected the wrong suitcase from the airport, meaning that they will have to wear the same clothes for the whole vacation. Greg’s mom warns everyone not to drink the local water but Greg’s dad ignores her and gets very sick. The next day, Greg is scared by a spider in the bathroom and orders room service so that someone will come to help him, but the waiter is also scared of spiders. As a team, Greg and the waiter manage to flush the spider down the toilet.

Greg and his mom try to sign up for some activities and Greg is disappointed to discover that swimming with dolphins is already fully booked. The family tries to eat in the golf clubhouse but they are told that they cannot come in because there is a formal dress code, which the Heffleys cannot follow because they lost their suitcase.

The family goes on a cruise and Greg initially refuses to go in the water because he is afraid of being eaten by sharks or stung by jellyfish but his mom insists that he joins the family in the water where he discovers that he really enjoys snorkeling. Greg panics and swallows a lot of water and his family takes him back to the resort to be checked out by a doctor. Back at the resort, Greg’s younger brother Manny brings a poisonous box jellyfish into the pool area leading to an evacuation and the pool being drained.

Tired of everything going wrong and wanting to have a nice meal, the family decides to wear the clothes from the suitcase they mistakenly picked up at the airport so that they can eat in the golf clubhouse. They are spotted by the family who own the suitcase and are thrown out of the resort for theft.

The next day they all sneak back onto the resort in order to make sure they have one nice day during their vacation. They are spotted once again by the family whose clothes they stole and are chased by security. Greg escapes into the ocean and starts windsurfing to get away from security. He finds himself surrounded by fins and is worried that he is about to be eaten by sharks but it turns out that he is swimming with dolphins.

Greg breaks down the barrier separating the Mild Side and the Wild Side leading to lots of families rushing through to use the Wild Side’s much better facilities. Greg and the rest of his family escape in the confusion.

Back at home, Greg visits the resorts website and sees a picture of his family asking for people who can identify them to come forward.

More summaries and resources for teaching or studying The Getaway (Diary of a Wimpy Kid Book 12).

The Getaway (Diary of a Wimpy Kid Book 12) from BookRags. (c)2021 BookRags, Inc. All rights reserved.