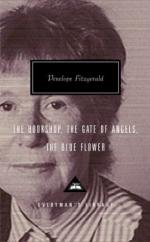 The Gate of Angels Summary & Study Guide includes comprehensive information and analysis to help you understand the book. This study guide contains the following sections:

This detailed literature summary also contains Topics for Discussion and a Free Quiz on The Gate of Angels by Penelope Fitzgerald.

Fred Fairly - the son of a minister - received a post as a Junior Fellow in one of Cambridge's colleges, St. Angelicus. Fred is a physicist focusing on the exciting intellectual work of his day. In addition to mentoring younger physics students, the conditions of his appointment include the tuning of musical instruments, and he must practice celibacy (his college had been founded some 500 years earlier by a disputed Catholic pope). He meets Daisy Saunders after a bicycling accident on Guestingley Road. The two, both unconscious, are taken in by Mrs. Wrayburn, wife of a Cambridge professor. The novel follows Fred and Daisy. Never having spent a half hour alone with a woman before, Fred falls in love with her, but he has no way of locating her. Daisy is an impoverished young woman from South London, who has been working towards a nursing position at Blackfriars Hospital until, trying to do a good deed, she is undone by a cad of a newspaper editor.

It is this disaster that brings Daisy Saunders to Cambridge. After the bicycling accident, Fred recuperates in a nursing home and Daisy, looking pale, goes back to London. When she returns to Cambridge, she quickly apprehends Mrs. Wrayburn's difficulty in caring for her husband. Daisy takes over the household chores in an informal exchange for a room (she also secures a job at Dr. Sage's hospital for lunatics). As soon as Fred learns of her return, he asks Daisy to take a walk with him in the country on her day off. They do; he proposes marriage; she says she'll consider it. The accident that has brought Fred and Daisy together became a matter of concern for both Dr. Matthews, an author of ghost stories, and the local police. The police are concerned by both Dr. Matthews' interest and the number of unknowns in the case.

The police investigation of the bicycling accident led to a trial, with Fred, Daisy and Mrs. Wrayburn being summoned as witnesses. To Daisy's dismay, while she is on the stand, the police introduce the third cyclist, Kelly, whom she denies knowing. Kelly, determines to do Daisy ill, testifies that he is waiting for her to come to him at Pett's Hotel--some rooms are rented by the hour--because he knows she has no money. This being a 1912 university town, all are of course horrified by the scandalous implications: Daisy leaves the courtroom without looking at Fred or anyone else; Fred waits in a cafe outside the courthouse for three hours until Kelly emerges, after which Fred vaults across the street and punches him unconscious. To his good fortune, a friend, Skippey, happens by and the two of them calmly walk down the streets of Cambridge--carrying the unconscious man's body between them, not questioned by anyone--discussing the famous Michelson-Morley experiments. After depositing Kelly's temporarily inert body in the Botanical Gardens, Fred attends his collegial duties and then takes a cab to Dr. Sage's hospital, where he waits for Daisy, who gets off work at "half-past six."

Like his Cambridge peers, he is horrified both by the idea of Pett's Hotel and Daisy having lied under oath (he thinks though his anguish will be ended if she will only say she does it to spare him embarrassment). Daisy responds indignantly to his inquisition--and the two part, her telling him not to return and closing the hospital door behind her. Fred makes it back to Cambridge in time to have sherry with Dr. Matthews at seven, after which he attends a lecture about how Rutherford came to disagree with his mentors about the nature of the atom. Daisy, after saying goodbye to Mrs. Wrayburn, heads towards Guestingley Road on her route back to London and the unknown of no job and no money. She is given a ride part way, misses the last bus, begins walking, meanders--and finds herself back in Cambridge, outside the gate of St Angelicus, which stands open, for the third time in its history. She starts to walk by but enters, hearing someone's cry of distress. After she lifts the old blind Master of the college back into his chair, she leaves, closing the door behind her, the entire event having lasted no more than 5 minutes. This is just long enough that she will encounter Fred Fairly walking back from attending an obligatory lecture about observable disagreements.

The Gate of Angels from BookRags. (c)2022 BookRags, Inc. All rights reserved.