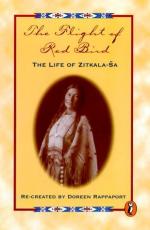 The Flight of Red Bird: The Life of Zitkala-Sa Summary & Study Guide

Doreen Rappaport
This Study Guide consists of approximately 23 pages of chapter summaries, quotes, character analysis, themes, and more - everything you need to sharpen your knowledge of The Flight of Red Bird.

The Flight of Red Bird: The Life of Zitkala-Sa Summary & Study Guide Description

The Flight of Red Bird: The Life of Zitkala-Sa Summary & Study Guide includes comprehensive information and analysis to help you understand the book. This study guide contains the following sections:

This detailed literature summary also contains Topics for Discussion and a Free Quiz on The Flight of Red Bird: The Life of Zitkala-Sa by Doreen Rappaport.

The Flight of Red Bird: The Life of Zitkala-Sa by Doreen Rappaport focuses on Gertrude Bonnin, an Indian girl who grew up on a reservation. She attended white schools. She had an identity crisis, fitting in both the white and Indian worlds. She used her knowledge of both cultures to become an Indian rights crusader and writer.

Gertrude was an Indian girl born on the Yankton reservation to Tate. Tate was a mother with strongly-held Indian beliefs. Gertrude did not know her white father. Tate doted on Gertrude, showing her traditional Indian ways. Gertrude listened to the elders' stories, which taught her about morality. Upon hearing how beautiful a boarding school was, she pleaded with Tate to be sent there. Tate agreed, knowing it was all a white man's lie. Gertrude attended White's boarding school, which was run like a harsh military school. Gertrude lost her Indian identity and adopted white ways.

When she returned to the reservation as an adolescent, she went through an identity crisis. Fitting neither into the white world nor the Indian world, a lifelong identity crisis followed her. She went to a white college to Tate's displeasure, becoming an accomplished musician and orator. After her marriage to Raymond Bonnin, the couple worked on the Ute reservation, but Gertrude hated the grunt work of farm life. She missed books and music. Raymond and she fought the government for the Utes to receive their $3 million land settlement, but to no avail. When they moved to Washington D.C., she was happy to be in a cultural place where she could enjoy music and literature again.

Gertrude began to write and submit stories to national publications signing her name as Zitkala-Sa, meaning Red Bird, which returned her to her Indian identity, known as Zitkala-Sa (not Gertrude). She served on the board of the Society of American Indians. Following her resignation, she and Raymond started their own organization called the National Council of American Indians (NCAI). She investigated the injustices of the Indian, but made no headway in changing laws since the government was still anti-Indian. Falling into despair toward the end of her life, Gertrude was poor and resented white government officials, who did not care about the plight of the American Indian. The Indians on the Yankton reservation were destitute. She felt she had nowhere to turn, feeling once again that struggle between the white and Indian world.

She died on January 26, 1938 doubting the importance of her life work, but others disagreed. Her work was of the utmost importance to Indian rights. She was a trailblazer in Indian rights and paved the way for others to follow her example.

More summaries and resources for teaching or studying The Flight of Red Bird: The Life of Zitkala-Sa.

The Flight of Red Bird: The Life of Zitkala-Sa from BookRags. (c)2022 BookRags, Inc. All rights reserved.