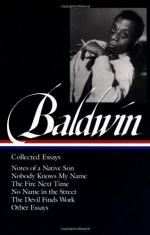 James Baldwin
This Study Guide consists of approximately 33 pages of chapter summaries, quotes, character analysis, themes, and more - everything you need to sharpen your knowledge of The Fire Next Time.

The Fire Next Time Summary & Study Guide includes comprehensive information and analysis to help you understand the book. This study guide contains the following sections:

This detailed literature summary also contains Topics for Discussion and a Free Quiz on The Fire Next Time by James Baldwin.

This book consists of two essays, both examining the so called "Negro Problem" in America in the early 1960's ("Negro" was the term then in use for African-American, and is used interchangeably with the term "black" in this book. The use of both terms in this analysis is therefore reflective of their usage in the book, and of the socio-cultural-literary context in which they were written). Themes other than "the Negro Problem" explored by the book include an examination of the shallowness and ineffectiveness of religious faith, and of inter-generational influences and relationships.

The two essays in this book make up what is essentially a three-point dissection of the so-called "Negro Problem" (a euphemism for racial tension) in the America of the early 1960's. The first of these three points is a personal perspective on the experience of being a Negro in America at that time, and is developed in both essays - throughout the entirety of the first, and in the extended middle section of the second. In both these pieces of writing, the author speaks eloquently, at times with anger and at other times with an almost desperate compassion, of how it feels to live the life of a Negro (with all the racist connotations of that word intact).

In this context, the first essay can be seen as a plea to his young nephew and, by extension, other young Negro men to transcend already simmering anger and adopt a broader, perhaps even compassionate perspective. This plea can also be seen, albeit not so plainly, in the writing in the middle section of the second essay, which is a narration of the author's experience of dining with Elijah Muhammad, a popular and charismatic Negro leader. The other young men in attendance at the dinner are, in many ways, portrayed similarly to the author's nephew; and the writing in this section is a similarly phrased and felt plea for broader perspective, deeper thought, and greater understanding.

The second point of dissection in the book is its detailed, at times almost vitriolic, examination of Christianity and its role in both American society and in the oppression of the Negro race. This examination takes place in the first part of the second essay, in which the author describes, with occasional poeticism, the joy with which he first became involved in the Christian church. He also describes his subsequent growing disillusionment with the church and its teachings. He describes at length how that disillusionment simultaneously deepened and broadened as he became older, detailing what he sees as the church's hypocrisies, developing theories about how those hypocrisies affected and continue to affect American life. He suggests that the only way America can become what it has the potential to become is to abandon Christian teaching.

The third point of examination of "the Negro Problem" is related to the second, and is portrayed throughout the book as the narrow, self-deluding limitations of the Christian, American perspective, not only on Negro Americans, but also on life itself. It's important to note that, throughout the book, these limitations are discussed not only in terms of white Americans, but also in terms of Negroes. The author suggests that in the same way as whites have been blinded to both their collective and individual truths, so have the Negroes. They have bought into what they have been taught to believe and told they MUST believe, and as such are fearful of challenging anything that might disrupt the safe, albeit toxic, status quo.

Throughout the book, the author suggests that the way past "the Negro Problem" in general, and these three manifestations of it in particular, is for both Negro and white America to transcend what they think they know, believe, understand and fear. He suggests that America, as both a country and an ideal, is handicapped by narrowness of thinking. Only by expanding perception and experience, on both sides, can America and the people living there become fulfilled and honored in the way it can, and perhaps should, be.

More summaries and resources for teaching or studying The Fire Next Time.

The Fire Next Time from BookRags. (c)2022 BookRags, Inc. All rights reserved.