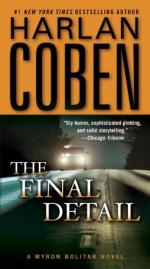 Harlan Coben
This Study Guide consists of approximately 36 pages of chapter summaries, quotes, character analysis, themes, and more - everything you need to sharpen your knowledge of The Final Detail.

This detailed literature summary also contains Topics for Discussion and a Free Quiz on The Final Detail by Harlan Coben.

The Final Detail by Harlan Coben is one book in the Myron Bolitar series. Myron is a powerful, high-priced sports agent who also moonlights as a detective of sorts. Whenever his clients or friends are in trouble, he always take it upon himself to investigate and find out the truth. This installment begins with Myron lounging on a beach with a beautiful CNN newscaster named Terese Collins. For reasons unknown to the reader, Myron feels as though he needs to escape from New York and his life. He has spent three weeks in the Caribbean with Terese attempting to forget what happened.

Out of nowhere, a yacht docks by the beach. Myron notices it as his friend Win's boat. Win gets off the boat and hastily approaches Myron. He announces that Myron's family is fine, but Esperanza, his business partner, is in trouble. Clu Haid, one of Myron's clients and friends has been murdered. Esperanza has been arrested for his murder. Myron is surprised, but ready to go into "detective mode" and help Esperanza. This may prove to be difficult because Esperanza does not want to see Myron.

Myron begins attempting to piece together what has happened by visiting Esperanza's lawyer, Hester Crimstein. Hester does not prove to be helpful because she does not want Myron's help with the case. Like Esperanza, she wants Myron to stay out of it.

Myron goes back to his office, to pick try to do some damage control for his company MB Sports Reps. He hears from Sophie Mayor, the owner of the New York Yankees. She is very angry with Myron, he promises to meet with her to placate her. As Myron continues to sort through his mail, he finds a brown envelope. Inside the envelope is a diskette, which Myron puts into his computer. The program runs itself. On the screen there is an image of a teenage girl. All of a sudden, the image begins to melt into blood. The red color begins to cover the screen and then the monitor switches off. Myron is shocked and disturbed. He does not know the girl on the screen and cannot understand why someone would send him such an awful picture.

Myron ventures up to Yankee Stadium to visit Sophie and Jared Mayor. As he tries to calm Sophie, he sees a picture on her desk. The picture is the same image as the one on the diskette! Although Myron is shocked, he finally brings himself to discuss the diskette to Sophie. The girl on the disk is Sophie's daughter, Lucy who has been missing for over twelve years. Sophie begs Myron to look for her daughter while he looks for Clu's real murderer. Myron agrees to help.

Myron finds out from that Clu may have been frequenting a bar named Take A Guess. Bonnie, Clu's wife, filed for divore shortly before Clu's death. Myron is sure this is because Clu was cheating on Bonnie. When he visits the bar, he begins asking different people about Clu. When the bartender Pat, is questioned, he becomes hostile. Myron is suddenly ceased by two cross-dressing men who proceed to beat him senseless. Myron finally escapes. Pat, the bartender, has some misgivings about Myron, but decides to hear him out. The next night, he invites Clu to another bar called Leather and Lace. He tells Myron that he will give him information on Clu if he goes with him to an undisclosed destination. After much deliberation, Myron agrees.

Myron is blindfolded, bound and taken to a deserted warehouse. He is greeted by an old friend, Bill Lee Palms, who has become a shell of the man he once was. Billy is clearly unbalanced and attempts to kill Myron with a shotgun. He accidentally shoots Pat instead. Just as he is about to end Myron's life, someone shoot Billy Lee from the shadows. Myron does not wait around.

After talking to one of Clu's ex teammates, Myron figures out that Clu was not having the affair, Bonnie was. When he confronts Bonnie, she admits that she and Esperanza were sleeping together. They have been keeping their affair and secrete and did not want Myron to find out and have to testify against Esperanza.

As Myron continues to delve deeper into the mystery of Clu's death, he receives a tip that Clu went to a hotel in Massachusetts three days before we dies. Myron remembers that Clu lived in Massachusetts over twelve years ago with Bonnie. Myron obtains the phone records from Myron's hotel room and traces the phone numbers. One belongs to a Ms. Barbara Cromwell. Myron visits her and discovers who has murdered Clu.

After returning to New York, Myron confronts Sophie Mayor. Sophie made Clu's life a living hell after he killed her daughter in a drunk driving accident twelve years ago. She had been a passenger in the car with Clu, Billy Lee, and Bonnie. Both Myron and Bonnie did not know that Lucy Mayor had been injured- Bonnie fell unconscious from the impact, while Myron arrived at the scene later. After the crash, Billy Lee and Clu hid Lucy's body. Myron bribed two policed officers to keep quiet about the accident and inadvertently buried all information about Lucy's whereabouts.

Sophie Mayor bought the Yankees so that she could hire Clu and then tamper with his drug test results. She built up his hopes and the broke them down. She also blackmailed Clu so that he lived in a constant state of hysteria. Sophie reveals that no one killed Clu, he killed himself. Myron is shocked. He demands that Clu's name be cleared but Sophie refuses. She will however, see that charges against Esperanza are dropped. The crime was never supposed to be blamed on her. Myron was supposed to take the fall.

Myron realizes it was wrong of him to bribe the officers. He must now live with what he has done. The book ends with Myron still coming to terms with his part in Lucy's death as he attempts to overcome his grief for Clu.

More summaries and resources for teaching or studying The Final Detail.