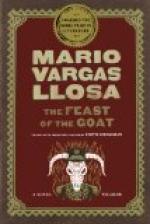 The Feast of the Goat Summary & Study Guide

This Study Guide consists of approximately 102 pages of chapter summaries, quotes, character analysis, themes, and more - everything you need to sharpen your knowledge of The Feast of the Goat.

The Feast of the Goat Summary & Study Guide Description

The Feast of the Goat Summary & Study Guide includes comprehensive information and analysis to help you understand the book. This study guide contains the following sections:

This detailed literature summary also contains Quotes and a Free Quiz on The Feast of the Goat by .

On May 30th, 1961, Rafeal Leonidas Trujillo, dictator of the Dominican Republic, was shot after 31 years of rule characterized by violence and oppression. The Feast of the Goat uses this historical event to create a subjective history of the horrors of Trujillo’s regime through the perspectives of both its victims and the dictator itself. Three separate stories make up its narrative. Here, the individual stories are summarized, but the novel alternates between telling a chapter of each.

In 1996 Urania Cabral, daughter of Agustin Cabral, high-ranking Trujillista, returns to the Dominican Republic. A successful lawyer, she is still haunted by memories of her childhood under the Trujillo Era and spends most of her free time reading about the history of the time period. Without knowing why, she goes to visit her father whom she has not seen in 35 years and is now in advanced states of cognitive decay, unable to speak or feed himself. Through Urania’s one-sided dialogue with him, the novel reveals bits of her past; we find out that she fled the country in 1961, the year of Trujillo’s assassination, and that she has not been in contact with any members of her family since. In the meantime, she has harbored a deep anger towards her father and a deep-seated but unnamed trauma that has prevented her from having relationships with men. Along with her own past, Urania remembers some of the violence of the Trujillo regime, such as the rapes committed by Ramfis Trujillo, the dictator’s son.

Simultaneously, the novel follows Trujillo’s actions on the fateful day of his assassination. While the novel depicts his strict daily routine, it also gives the reader access to the dictator’s thoughts. Trujillo worries about a conflict between the dictatorship and the Catholic Church, the sanctions imposed by the OAS after his failed attempt to assassinate the President of Venezuela, and above all, a memory of a skinny girl who the novel hints he slept with. As the day progresses, Trujillo meets with several of his closest lieutenants. He dismisses warnings about a potential conspiracy, but the memories of the girl keep intruding on his thought. The novel also reveals his struggles with another enemy: his bladder, which he has lost control over. Lunchtime is the most graphic chapter, as Trujillo gives a speech recalling his massacre of Haitian immigrants in 1937, congratulating himself for what he sees as saving the Dominican Republic.

The third narrative follows four assassins on the night of May 30th as they wait for Trujillo on a sea-side road. In turn, they remember the events that lead them to kill the dictator. Amadito, one of Trujillo’s bodyguards, remembers how he was denied permission to marry the woman he loves and forced to execute her brother, a Communist. Antonio de la Maza recalls how his brother, a loyal Trujillista, was murdered and defamed by the regime. Imbert, who used to be governor of Puerto Plata, thinks of his brother in jail and the years he has spent suffering pretending to be a loyal servant of the regime. Salvador, a devout Catholic, thinks back to the Pastoral Letter issued by the Catholic Church denouncing Trujillo and how it finally gave him the strength to rebel against the regime.

As the novel draws closer to the assassination, Urania’s narrative shows Urania’s cousin Lucinda arriving at Agustin’s house and her surprise at finding her there. She invites Urania for dinner at the house of Adelina, Lucinda’s mother. During the dinner, the family accuses her of ingratitude and laments how Agustin fell from grace with the dictator. In a combination of memory and recounting, the novel shows how Agustin struggled to reclaim his status after being ousted from the regime for reasons everybody refuses to tell him. After attempting to remain polite, Urania finally denounces her father, speaking of his great crimes. Lucinda and the others ask Urania to explain herself, and Urania tells them of her father’s solution to the problem: how he, along with Manuel Alfonso, planned to offer the young Urania to Trujillo as a bribe.

At the same time, the novel juxtaposes this narrative with Trujillo and his political scheming. After almost urinating himself in public, he decides to go to the Mahogany House that night and have sex with a woman to rid himself of the memory of the skinny girl. He meets with Joaquin Balaguer, the President of the Dominican Republic, and to his own surprise, discusses religion with him at length. After discussing the situation with the Catholic Church and the conspiracy with his advisors, he humiliates Roman Pupo, head of the Armed Forces. As he dreams about his sexual conquests, he drives to the Mahogany House. His narrative ends abruptly as he is shot.

In the assassins’ narrative, the assassination is a clumsy, chaotic event that ends with one of the assassins shot. This eventually leads to the unravelling of the conspiracy, as the wounded assassin is found by Johnny Abbes, head of the secret intelligence, and reveals everything. Roman Pupo, who is supposed to start the military coup, instead falters. As a result, he is arrested and subjected to brutal torture by Ramfis. The novel depicts the flight of each assassin and their last stands from their perspective. It also shows how Joaquin Balanguer assumes power and eventually transforms the Dominican Republic into a partial democracy.

In the final chapter, the novel returns to Urania’s narrative, revealing that she was the skinny girl. Despite Adelina’s protests, Urania recounts her rape at the hands of Trujillo, and his anger at his inability to get an erection. She reveals that the rape left her “a desert,” unable to find intimacy with any other person (400). As Lucinda drives Urania back to her hotel, Lucinda’s daughter Marianita asks Urania to stay in contact with them. Urania decides that she will answer if Marianita ever writes to her.

More summaries and resources for teaching or studying The Feast of the Goat.

The Feast of the Goat from BookRags. (c)2022 BookRags, Inc. All rights reserved.