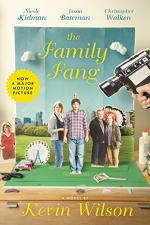 Kevin Wilson
This Study Guide consists of approximately 40 pages of chapter summaries, quotes, character analysis, themes, and more - everything you need to sharpen your knowledge of The Family Fang.

This detailed literature summary also contains Quotes and a Free Quiz on The Family Fang by Kevin Wilson.

The following version of this book was used to create this study guide: Wilson, Kevin. The Family Fang. New York: HarperCollins, 2011.

The novel opens with a brief scene in 1985. Performance artists Caleb and Camille Fang arrive at a mall with their children and stage a scene so as to cause public confusion and unrest. This is typical of Caleb and Camille’s work. The main narrative takes place years later, in 2007. Annie is about 30 years old, and she is now a fairly well-known Hollywood actress. She was even nominated for an Academy Award one year. However, her career has begun to suffer due to a recent bad movie and other mishaps that hurt her public image. When Annie’s ex-boyfriend—a successful screenwriter named Daniel—tries to coerce Annie into resuming their relationship, Annie decides to go visit family in Tennessee.

Buster is in his late 20s and is a struggling writer. His first two novels were unsuccessful, and he now make a meager living writing magazine articles that do not interest him. One day, while interviewing some people for an article, an accident causes him some to endure fairly severe head injuries. Fortunately, there is no major brain damage. Buster has almost no money by that point, so he reluctantly decides to go to his parents’ house in Tennessee to recover. When Buster and Annie arrive in Tennessee, they find that their parents are somewhat restless. Caleb and Camille have not had any significant performance art pieces since Buster and Annie moved away about a decade ago.

Buster and Annie try to acclimate to temporarily living with their parents again. Buster gives a guest lecture about writing at a local community college, and he befriends a student named Suzanne. One day, less than a month after Buster and Annie arrive in Tennessee, Caleb and Camille go missing. The police find their van near a highway. There is no one in the van, and the police find bloodstains inside. Annie is convinced that Caleb and Camille have faked their own deaths/disappearance for an art piece. Meanwhile, Buster believes that it is possible that Caleb and Camille are actually dead.

Caleb and Camille admit that they faked their disappearance for an art piece. They plan on revealing themselves in seven years. (The state of Tennessee legally declares missing people dead after seven years.) Annie and Buster realize that they will never be able to have a healthy relationship with their parents, as Caleb and Camille value art more than they value any interpersonal relationship. Annie and Buster agree not to tell anyone of Camille and Caleb’s whereabouts, and they also decide never to speak to their parents again. The novel then shifts ahead approximately one year. Annie is working on an artistically promising new film, and she is enjoying the work. Also, Annie and the director—Lucy—begin to develop a mutual romantic attraction. Meanwhile, Buster has formed a romantic relationship with Suzanne. Buster takes a job teaching at the community college, and he begins writing fiction again.

More summaries and resources for teaching or studying The Family Fang.