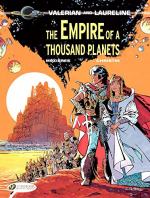 The Empire of a Thousand Planets (Valerian) Summary & Study Guide

The Empire of a Thousand Planets (Valerian) Summary & Study Guide includes comprehensive information and analysis to help you understand the book. This study guide contains the following sections:

This detailed literature summary also contains Quotes and a Free Quiz on The Empire of a Thousand Planets (Valerian) by Pierre Christin.

Mezieres' and Christin's Valerian and Laureline: The Empire of a Thousand Planets takes readers on the next mission of Valerian and Laureline, two space travelers who work for Earth's Spatio-Temporal Agency. Valerian is the leader of the duo, but Laureline is also capable, intelligent, and determined. This novel opens as the two travelers are about to arrive at Sytre, the capital city of an extensive galaxy. As far as they know, they are the first Earth travelers to reach the galaxy, which has yet to create time/space jump technology.

They are briefly kidnapped and discover an abandoned power plant and scientific lab. Upon their return to the city, Valerian becomes convinced that there is something wrong with the galaxy's leader, Prince Ramal. He and Laureline manage to sneak into the palace where they have yet another encounter with the Enlighteneds and find that Prince Ramal seems interested only with the next social event.

A merchant named Elmir reveals that the Enlighteneds have forced an end to science and exploration, inserting themselves as rulers of the galaxy. Elmir has gathered a group of people willing to fight the Enlighteneds, and they ask Valerian and Laureline to lead them. The battle is short, thanks to the technology Valerian within his spaceship.

On an asteroid, Valerian finally has a face-to-face meeting with members of the Enlighteneds. He learns that they are from Earth, sent to find a habitable planet centuries earlier. They have become immortal, thanks to a substance mined on the asteroid. Their hatred of Earth – for putting them in this situation – has driven them for centuries. Now, realizing that Earth's technology is far superior and that their hope for revenge is futile, they all commit suicide.

Valerian, Laureline, and Elmir return to the capital where they discover that the people have begun a revolution. Valerian points out that the Enlighteneds would not have been able to take control of the galaxy unless there were underlying problems. Agreeing, Elmir sets out to join the fight, hoping to be part of the new government and telling Valerian they would be open to a trade agreement with Earth.