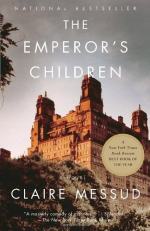 Claire Messud
This Study Guide consists of approximately 42 pages of chapter summaries, quotes, character analysis, themes, and more - everything you need to sharpen your knowledge of The Emperor's Children.

This detailed literature summary also contains Topics for Discussion and a Free Quiz on The Emperor's Children by Claire Messud.

Claire Messud's novel, The Emperor's Children, traces the lives of three college friends who are approaching the age of thirty in 2001 Manhattan, New York. Their experiences in the months approaching 9/11 depict the struggles of finding and losing love, establishing an identity in a changing world, and the consequences of chasing an ill-chosen dream.

Danielle Minkoff, Marina Thwaite, and Julius Clarke have kept in close touch in the years following college, and are now approaching thirty. Danielle is established in her career, but feels there is something missing in her life. Marina has been working on a book for seven years with no completion in sight. Julius is working temporary jobs, putting on a front to the world, and yearning for the chance to be part of a great gay couple with someone who is wealthy and powerful.

Danielle meets Ludo Seeley during a business trip to Sydney, Australia and is immediately attracted to him. When Ludo moves to New York, however, he meets Danielle's friend Marina and they become lovers. When Marina's father, Murray Thwaite, begins to flirt with Danielle, she becomes involved in a love affair with this man who is married and thirty years her senior.

Ludo is in New York to launch a thought-provoking, rebellious magazine called The Monitor, and he begins his rebellion against society by sniping at Murray; however, he makes all of his derogatory remarks to Marina and Danielle, never to the man himself. Ludo seems to be accomplishing his goals to destroy Murray and those icons like him when he marries Murray's daughter and begins turning her against her father, and then obtains Bootie's expose of Murray and prepares to publish it. However, the events on 9/11 end the magazine and Ludo disappears from the novel to seek employment in England.

Marina finishes her book entitled The Emperor's Children Have No Clothes. Instead of a frivolous view of children's fashion, it has becomes a critical summary of society's failure to allow children to be childlike, dressing them instead to reflect absurd societal values. Ludo's influence on Marina has effected this change, and Murray instantly declares the book unworthy of publication.

Julius finds his long-awaited relationship with David Cohen, but immediately begins to be unfaithful with strangers, seeking the thrill of almost getting caught. When Julius actually does get caught by David, the results are disastrous and violent, and Julius comes away physically and emotionally scarred for life.

Bootie is an innocent and self absorbed young man who enters the world of Manhattan society completely unprepared and unsuspecting of what awaits him when he seeks out Murray to offer himself as a disciple at the great man's feet. Judy sees her son leave the safety of the Watertown family home, never to return. Bootie is welcomed into the Thwaite home, but not into the family. He is given employment, which allows him access into Murray's private sanctuary. Bootie believes he was meant to find Murray's secret manuscript, reads it, and prepares a biting but badly written expose of the work. Bootie gives copies of his article to his mother, his cousin Marina (who he has fallen hopelessly in love with) and to Murray. Bootie is completely surprised to be summarily thrown out of Murray's office, and makes his way to a rundown apartment in Brooklyn, where he is living when the terrorist attacks of 9/11 occur.

Danielle begins to realize that she is just a diversion to Murray and that he may never leave Annabel for her. This becomes a reality on the morning of September 11th, when Murray leaves her after a night of passion and the horror of the attacks, and goes back to Annabel for his own comfort.

Bootie uses the confusion of the attacks to depart Manhattan for Florida, where he changes his name and his view of life.

Danielle is depressed by what has happened to her chosen home town and by Murray's abandonment, and she contemplates suicide. Just before completing this attempt, she reaches out to her brassy but positive mother, Randy, who rescues her and takes her to Florida to recuperate.

There in Florida, Danielle encounters Bootie, who is now so completely transformed into Ulrich New, he speaks of Bootie as a deceased friend of Danielle's, and offers sympathy. The morning after encountering Danielle, Bootie leaves Florida, positively looking forward to a future where he will continue to take the world by surprise.

More summaries and resources for teaching or studying The Emperor's Children.