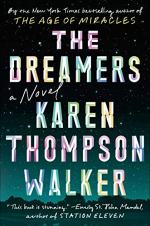 The Dreamers Summary & Study Guide includes comprehensive information and analysis to help you understand the book. This study guide contains the following sections:

This detailed literature summary also contains Quotes and a Free Quiz on The Dreamers by Karen Thompson Walker.

The following version of this book was used to create the guide: Walker, Karen Thompson. The Dreamers. Scribner, 2019.

Walker’s novel tells the story of a small fictional town outside Los Angeles called Santa Lora when there is an outbreak of a previously undiscovered virus. The novel is written in an omniscient third-person point of view, allowing the narrator to follow a whole cast of characters.

The virus begins on one particular floor of a dorm for Santa Lora College. The first discovered case is in a girl named Kara, Mei’s roommate. Kara falls asleep one night and cannot be woken. She is still breathing and looks like she might be dreaming, but nothing will wake her. Mei has already had a hard time making friends in her first six weeks at college, and Kara’s illness does her no good in that regard. When Kara passes away soon after, most of the town writes it off as a fluke until more and more of the students do not wake up. The floor is placed under quarantine while local doctors try to figure out the cause. A psychiatrist from LA, Catherine, is called in to assess the mental state of the patients. In the aftermath of Kara’s death, Rebecca and Caleb--from the same floor as her--go to a party and have sex afterward. Rebecca does not wake up the next morning, and she is pregnant.

Sara and Libby are 12- and 11-year-old sisters who live in town, their father a doomsday prepper with tons of secret supplies in the basement. He is also a janitor at the college, tasked with disinfecting Kara’s old room without any protective gear. The narrator also follows Nathaniel, a biology professor at the college. The campus is closed until further notice. Rebecca lies in the hospital in the first stages of pregnancy. Mei meets Weird Matthew while under quarantine. He is an overly logical boy who likes to ruminate on philosophical problems, and Mei is drawn to him. Catherine notices the now ten patients all appear to be in REM sleep.

The narration jumps to the last of the characters it will follow throughout the novel: Ben, Annie, and their newborn Grace. More cases pop up in the dorm, and the doctors begin to realize the virus is something new.

Sara and Libby’s father refuses to let them go to school for fear of the virus. Catherine is called in when one of the patients is the first to wake up. The boy gets too confused and commits suicide. Ben and Annie find out the donated breast milk they have been feeding Grace may carry the virus. Grace is monitored closely.

Mei and her classmates are moved to the gym, where the virus cannot spread through ventilation. Mei discovers they are locked into these new quarters. Caleb gets sick and is taken to the hospital, which is now under quarantine.

There is a forest fire outside of town, and Sara and Libby are unable to wake their father. The students in the gym hear about the fire and break their quarantine. Mei and Matthew run the same direction, and Mei takes them to a house they can stay at. Sara and Libby’s father is taken away. Ben and Annie try to leave town before the virus spreads, but a barricade has been erected, and Grace is on a list of the exposed. They are not allowed to leave.

Nathaniel’s husband Henry, who lives in a nursing home, is exposed when one of the residents falls ill. Nathaniel lasts a little longer before catching the virus himself. The patient count has reached 500. Medical tents begin to pop up around the hospital. Annie falls asleep while holding Grace, and Ben calls her an ambulance. The National Guard arrives to distribute supplies to the town, but makes sure the town knows they are also there to maintain order.

Sara and Libby stay in their house for two weeks undetected. People begin to gather on both sides of the blockade at the edge of town, all looking for family. Matthew reveals he is ashamed to be the heir of a pharmaceutical company. Chaos is descending as the patient count hits 700, and that is only the number of sleepers they have been able to find. Mei and Matthew help wherever they can, an odd sort of love blossoming between them. Grace contracts the virus, and the next night, Sara and Libby find Ben sleepwalking through their house, also sick. The next night, Libby is also sick. Mei and Matthew take her to the medical tents, where many people are sleeping outside with name tags. The wards have expanded to the college library, and still there is not enough room. Matthew cannot wake Mei the morning after a fight.

A second patient wakes up. He screams, incoherent, repeating a warning about a fire at the library. It is Sara and Libby’s father, Thomas, who immediately returns home. He has trouble deciphering the past from the present and future. The library catches fire the next day. Some patients wake up in order to save themselves, and all but nine are saved. Mei dies in the fire. Ben and Annie both awake from the fire, though Grace does not. Matthew was the one to run in to save her.

Libby and Nathaniel both wake after just three weeks. Nathaniel cannot tell if he dreamed Henry was cured of his dementia, or if that was real. Rebecca is 13 weeks pregnant before the virus, named the Santa Lora Virus, begins to taper off. Ten percent of all infected with the virus die from it. Rebecca sleeps through the rest of her pregnancy, but has a baby girl through c-section. The baby also has the virus. Rebecca wakes after almost a year of sleep and raises her baby at 19. Nathaniel finds a doctor who claims he can replicate the effects of the virus, and Nathaniel goes with Henry to sleep.

Many of the victims of the virus have trouble distinguishing between reality and dreams. Those who dreamt while ill have trouble understanding what is past and future. Some think they saw the future in their dreams. Everyone wakes up confused about both time and reality.