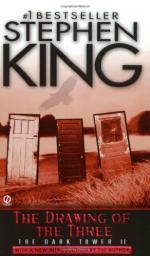 The Dark Tower II: The Drawing of the Three Summary & Study Guide

Stephen King
This Study Guide consists of approximately 48 pages of chapter summaries, quotes, character analysis, themes, and more - everything you need to sharpen your knowledge of The Dark Tower II.

The Dark Tower II: The Drawing of the Three Summary & Study Guide Description

The Dark Tower II: The Drawing of the Three Summary & Study Guide includes comprehensive information and analysis to help you understand the book. This study guide contains the following sections:

This detailed literature summary also contains Topics for Discussion on The Dark Tower II: The Drawing of the Three by Stephen King.

This second addition to the Dark Tower series brings the reader through a series of different times and places as its hero, Roland, continues on his quest for the Dark Tower. Roland develops strong friendships as he works to overcome a nearly fatal infection. However, the Dark Tower looms in the future and Roland realizes that his search for the Dark Tower might be both the beginning and the end of his relationships with his new companions.

Roland awakes on the beach after sacrificing Jake to continue on the quest for the Dark Tower. He is haunted by the man in black, Walter, a long-time negative force in his life. Roland narrowly avoids being eaten by the lobster creatures that inhabit the sea. To further complicate his problems, he is wounded by an attack by the lobster creatures. His supply of bullets is also damaged, greatly reducing his chances for survival. Roland is curious about a prophecy that has been made about his quest for the Dark Tower. He goes out to find the companions that are hinted at in this prophecy.

Roland's search takes him to a door in the desert. When he goes through the door, he finds himself in the mind of Eddie Dean. Eddie Dean is a heroin addict who is smuggling cocaine from the Caribbean. Roland figures out how to help Eddie avoid being detected by Customs by bringing the cocaine back to his own world. Though Eddie makes it out of the airport, he is then in more serious trouble when his drug dealer comes to collect the missing cocaine. Eddie narrowly misses being killed. Roland brings him into his own world.

Eddie and Roland go through a long illness. Eddie's illness is from drug withdrawal. Roland is fighting the infection that has taken over his body. Eddie recovers from his withdrawal a little faster than Roland manages to recover from his illness. Eddie hunts the lobster creatures in order to feed them both. When Roland's antibiotics run out, they must travel to find another door in order to find more medicine. Eddie follows Roland along the coastline in search of a new door.

As they travel to find another door, they grow weak again from the strain on their exhausted bodies. Roland urges Eddie to continue. When they finally reach the door, they discover that it belongs to the mind of Odetta Holmes/Detta Walker. This woman has a split personality resulting from a traumatic accident that left her in a wheelchair. Odetta Holmes is the good and sweet side while Detta Walker is evil and angry. When they enter the doorway, they meet Detta's personality. When Roland brings her through the door, she transforms into Odetta. Eddie falls in love with Odetta.

During the night, Odetta transforms back into Detta and attempts to kill them both. Roland, however, has stayed awake and is able to save them and restrain Detta. As Odetta and Detta take turns inhabiting the same body, Eddie falls deeper in love with Odetta and Roland grows increasingly scared of Detta.

By this point, Roland has grown too weak to be able to travel on his own any further. They make a plan by which Eddie pushes Odetta in the wheelchair to the next door and then leaves her there in order to return to Roland and take him to the same door in the wheelchair. The two of them find another door. Eddie leaves Odetta with a gun and returns to Roland. Roland is angry that Eddie has given a gun to Detta. They journey back to the door.

Roland enters the door by himself while Eddie stays behind looking for Odetta, who has disappeared. This door is the mind of Jack Mort, a sadistic man who kills people by making it appear as an accident. Coincidentally, he is the one responsible for Odetta's accident. Roland uses Jack's body to get the medication he needs to cure his infection. He also uses the doorway to make Odetta come to terms with her split personality. When Detta comes to the doorway to threaten Roland, she sees herself and the self of Odetta reflects in Jack Mort. When she sees herself through the eyes of Jack Mort, her two personalities become one.

The new combination of Odetta and Detta is renamed Susannah by Roland. She is able to save Roland and Eddie from the lobster creatures right before they could be eaten. Roland, Eddie, and Susannah continue on their journey together to find the next doorway that might lead them to the Dark Tower. Susannah and Eddie grow closer in their love for each other, while Roland contemplates his own willingness to sacrifice them for his obsession of reaching the Dark Tower.

More summaries and resources for teaching or studying The Dark Tower II: The Drawing of the Three.

The Dark Tower II: The Drawing of the Three from BookRags. (c)2022 BookRags, Inc. All rights reserved.