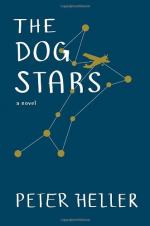 Peter Heller
This Study Guide consists of approximately 49 pages of chapter summaries, quotes, character analysis, themes, and more - everything you need to sharpen your knowledge of The Dog Stars.

This detailed literature summary also contains Topics for Discussion on The Dog Stars by Peter Heller.

Earth is warming, not cooling as was predicted. Hig still flies his 19556 Cessna, hand pumping the fuel when necessary and keeping his flights local to conserve the fuel that he has. Bruce Bangley, Hig's only neighbor, arrived after Hig had already made his home in the hangar near his plane. Hig retreated there when his wife and child died, unable to face life in the home they shared. Now, Hig and Bangley are part of a small group of survivors. First the flu had hit, beginning when a sample was being shipped from one lab to another and the plane it was in crashed. The illness spread quickly, taking people in days and overwhelming medical services. A blood disease similar to AIDS followed closely behind, killing most of the flu survivors. Some survived. Most didn't. Now, the earth is slowly ridding itself of all species with only few exceptions.

Hig and Bangley settle into a routine of sorts. Hig takes his dog Jasper and hunts deer, using a sled to drag them back down the mountain. He also enjoys fishing, although the trout are long gone. Now, all that remain are bottom feeders, but he makes the best of it. Bangley tries not to resent the time that Hig is gone, feeling unprotected on his own. A group of about thirty Mennonites live ten miles to the south. A sign informing travelers that they have the blood disease keeps them safe from renegades, and Hig, keeping his distance, lands to help them on occasion if necessary. It is Hig's job to patrol their perimeter daily to ensure their safety. When Jasper dies on one of Hig's hunting trips, he is gone much longer than expected and Bangley is sure he is dead. When he returns, Bangley sets himself up in the tower to protect Hig across the open space, and sees that he is being pursued. Bangley talks Hig in, telling him where to hide, how to shoot and when. It is a narrow escape, but Hig is restless. He tells Bangley shortly afterward that he wants to explore a radio signal he heard three years earlier. The problem is that the signal originated from Grand Junction which is a distance past Hig's point of no return. Despite this, sure that he can scavenge fuel in Grand Junction to return, he leaves Bangley by himself. On the way to Grand Junction, Hig discovers a man and his daughter living in a box canyon. The old man tries to shoot him down, but Hig is not deterred. He lands in a field nearby, and approaches to find the area deserted. The man and woman have hidden, and fire on him again from cover. Hig notices the cattle, and sheep, surprised to see either. He finally manages to convince them that he means them no harm, and stays with them for some time. Before the summer ends, the old man explains their need to leave the farm. They are suffering a drought that kills more animals each year. The old man wants Hig to fly them all out of there and back to Erie airport where Bangley waits. Hig explains his point of no return, but with some wrangling, they manage to work out the logistics necessary to get them all to Grand Junction. The surprises continue. The airport at Grand Junction is booby trapped, and Hig has to do some fancy maneuvering to keep them alive. Once the trap is avoided, the couple who armed it are quickly dealt with and the trio heads for Erie after refueling. Bangley is near death, having suffered an attack while Hig was gone. Fourteen people almost manage to get the upper hand, but Bangley's grenade launcher saves him. It is just one is a myriad of close calls, and desperate actions that are required for survival in this new world. Humanity and hospitality are all but things from the past, and they have entered a shoot first ask questions later kind of existence. It is an Earth of challenges, and obstacles, but signs of our species' survival become increasingly evident.

This story is like a glimpse into a possible and perhaps even probable future. Will we succumb to an all encompassing virus? Will we lose our way in the process? This is a good read with thought provoking events and situations.

More summaries and resources for teaching or studying The Dog Stars.