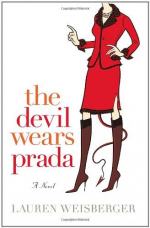 Lauren Weisberger
This Study Guide consists of approximately 44 pages of chapter summaries, quotes, character analysis, themes, and more - everything you need to sharpen your knowledge of The Devil Wears Prada.

This detailed literature summary also contains Topics for Discussion and a Free Quiz on The Devil Wears Prada by Lauren Weisberger.

The Devil Wears Prada by Lauren Weisberger is the story of Andrea Sachs, a 23 year old woman who aspires to write for The New Yorker one day. After graduating from Brown University and traveling Europe for the summer, Andrea returns home and looks for a job while staying with her friend Lily in New York. Andrea receives a call from Elias Clark, a major magazine publisher and is surprised to find that they have read her resume and would like to speak with her about a position they have available.

Andrea interviews at Elias Clark and learns that Miranda Priestly, the Editor in Chief of Runway Magazine is looking for a new assistant, a job, Andrea is informed many times over, that a million girls would kill to have. Though Andrea is not sure that being an assistant is what she wants to do she finds out from Emily, Miranda's current assistant, that if someone works for Miranda for a year and does well, Miranda considers them ready for promotion and helps them find the position they are for. Meeting Miranda, Andrea is pleasantly surprised by the grace a woman with such power shows and is pleased with how the interview goes.

Andrea is at her boyfriend Alex's apartment when she gets a call informing her she has gotten the job for Miranda. A bit stunned by the fast pace at which the office would like her to start, Andrea manages to put them off until she finds an apartment in the city. Alex is pleased for Andrea, knowing that the position at Runway will get her one step closer to her dream of being a writer for The New Yorker. Andrea knows that Alex, her boyfriend of three years, is a wonderful man and how lucky she is to have such an understanding partner. Andrea's family and her friend Lily, a student, are also happy for her, and all work together getting her ready to start her new job.

Andrea's first few days at Runway are a training period, as Miranda is on vacation. Despite this the days are hectic and Emily drills Andrea on how things are in the office and making sure that she anticipates Miranda's wishes and performs her duties in such a way that Miranda will find little fault in them. The days are long and a bit stressful but Andrea feels that she is ready when Miranda returns from Europe.

Andrea soon discovers that working for Miranda is as far from easy as anything can be. Miranda has worked her way up to her position from a poor childhood and controls every factor of her life in order to make sure she will never be in such a position again. Andrea learns that there is almost no pleasing her boss and Miranda has no problem at all informing Andrea that she is incompetent at best. Andrea's days get longer and her duties soon begin to takes a toll on her life outside of work.

While Andrea struggles to make sure that a hot breakfast waits for Miranda each morning, even if she has to throw out four meals before her boss arrives, or find the review of an unknown restaurant in one of the twelve newspapers that Miranda reads daily, life changes outside of the office for her. Lily, Andrea's friend since grammar school, sinks deeper into a drinking problem, one that Andrea has been in denial of for months. Alex, the understanding boyfriend, begins to question Andrea's commitment to her boss rather than her friends and family. Andrea is aware that her life is spiraling out of control to a certain degree, but cannot seem to stop herself from trying to please the implacable Miranda.

After traveling to Paris with Miranda for Fashion Week, choosing her job over time with Alex, things come to a head. Alex tells Andrea that they might need time apart and Andrea does not argue the point. Andrea's family is disappointed as well, as they have not seen her in months. Andrea, close to the end of her year with Miranda is unwilling to give up the time she has spent working with the hellish woman. While in Paris Andrea meets up again with Christian Collinsworth, a writer she had met in New York. The two spend an evening together and despite the fact that she has a good time Andrea cannot help compare the man to Alex. Returning to the hotel the night of the party Andrea discovers two calls, one from Alex and one from her mother. Both inform her that Lily has been in an accident and is in a coma. Andrea is devastated but worries that if she leaves Paris Miranda will fire her. After taking a call from her father Andrea informs Miranda of her friend's condition, but reassures her boss that she is committed to stay in Paris and do her job. Miranda, having spoken to Andrea about possibly calling The New Yorker when they return to America informs Andrea that she is pleased that she has made the right decision and that Andrea reminds her of herself when she was younger.

Andrea is taken aback by this statement, realizing that she is becoming the woman she has detested working for for almost a year. When Miranda has another unwarranted tirade Andrea snaps and quits, finally breaking free and doing the right thing.

Andrea and Lily move in with Andrea's parents for a few months while Lily recuperates from her injuries and Andrea writes. Before long Andrea is surprised that several of her stories will be purchased, specifically one that she has written that is similar to her own relationship with Alex. Andrea is pleased. Writing is what she has always dreamed of and despite the fact that she is not writing for The New Yorker yet, she knows that she can accomplish what she wants on her own and does not need a year working for a woman such as Miranda to get it.

More summaries and resources for teaching or studying The Devil Wears Prada.