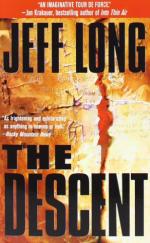 Jeff Long (writer)
This Study Guide consists of approximately 34 pages of chapter summaries, quotes, character analysis, themes, and more - everything you need to sharpen your knowledge of The Descent.

The Descent: A Novel Summary & Study Guide includes comprehensive information and analysis to help you understand the book. This study guide contains the following sections:

This detailed literature summary also contains Topics for Discussion on The Descent: A Novel by Jeff Long (writer).

The Descent is a novel by former journalist Jeff Long. In this novel, Long tells the story of a newly discovered race of people, the hadals, who live in the depths of the earth. Humans discover these people in a series of unrelated events and find themselves making forages into the earth to rid the world of these savages and claim a new, expansive land for themselves. The Descent is a novel of mystery and intrigue, but also a novel that explores some of the darker aspects of history and human nature in a refreshing take on an old story.

Ike Crockett takes a group of mountain climbers into a cave when they get lost shortly before a snow storm. After days of being trapped in the cave by the falling snow, one of the climbers disappears. Ike divides his group, sending his partner and lover, Kora, one direction with the other climbers, and goes the other alone. After a set amount of time, Ike turns back to meet up with Kora and her group only to discover that she has not returned. Ike goes in search of Kora and finds that the group has been assaulted by some unknown assailant and Kora has been kidnapped.

A few years later, Major Elias Branch is stationed in Bosnia when it appears that locals are attempting to destroy the recently excavated remains of war victims. Branch volunteers to fly his helicopter over the excavation to get proof of the vandalism. However, when Branch attempts to get low enough to see the area, his helicopter's engines are shut down due to high levels of nitrogen. On the ground, Branch and his navigator are attacked by an unknown group of people.

After witnessing odd physical changes in Branch after his experiences in Bosnia and his insistence that he was attacked by anemic monsters, the military gives him a small unit of men to take into the bowels of the earth. Branch's group brings back a picture of a footprint that seems to confirm what Branch has been claiming since his attack in Bosnia. This begins a worldwide exodus into the bowels of the earth. These voyages lead to the deaths of over forty thousand American troops and thousands of troops from all over the world when they are attacked by an unknown race of people. These people are given the name hadals. For several years, the world enters into a war with the hadals, finally declaring victory when sightings of hadals reduce to none.

A group of intellectuals, headed by Jesuit priest named Thomas, begin to investigate the possibility that the hadals are led by a single entity who has been known as the devil by people throughout the world for centuries. In order to further their investigation, the group sends Ali, a struggling nun, into the underworld as part of an expedition funded by the Helios Corporation. Helios plans to make a claim on thousands of miles of land underneath the Pacific Ocean with this expedition. The expedition is headed by Montgomery Shoat, the son of former presidential candidate and head of Helios Corporation, C.C. Cooper. The lead scout is Ike Crockett, a human who only a few years before was rescued after eleven years as a captive of the hadals.

The expedition goes undeterred for months despite the possibilities of disaster that await the group hundreds of miles under the Pacific Ocean. However, things begin to go terribly wrong when Shoat and the mercenaries hired to protect the group decide to go off on their own after the entire group becomes the target of a group of hadals after the militants kill all their women and children. Ike tries to reassure the remaining group, made up of scientists and intellectuals, but more than half of them choose to go back the way they have come. This group all come to their deaths. Ike's group survives for weeks, but suffers from starvation.

As Ike's group takes refuge in what appears to be an old trading center, the mercenaries return. The mercenaries take the remaining scientists hostage and begin to plot their way out of the bowels of the earth. One day the hadals attack, killing most of the mercenaries and remaining scientists. Ali, the nun, is taken hostage. Ike follows Ali to the center of the hadal world and rescues her, managing to escape the underworld despite the dangers and the release of a poison gas that kills the remaining life under the earth.

More summaries and resources for teaching or studying The Descent: A Novel.

The Descent: A Novel from BookRags. (c)2022 BookRags, Inc. All rights reserved.