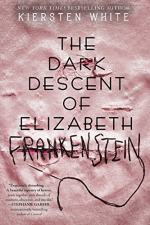 Kiersten White
This Study Guide consists of approximately 55 pages of chapter summaries, quotes, character analysis, themes, and more - everything you need to sharpen your knowledge of The Dark Descent of Elizabeth Frankenstein.

Ingolstadt is the first city Elizabeth and Justine visit while searching Victor. It has a prestigious university that Victor attended as well as a boarding house for women with strict rules and an unkind owner. However, due to Victor’s murders (which is not known until much later in the novel), the city has a bad reputation. Furthermore, it is revealed when Elizabeth visits the graveyard and the charnel house that many students steal bodies for their research. This is where Elizabeth finds Victor’s original research and body parts and decides to burn his house down, thinking that she is protecting him.

The Frankenstein Estate is where Elizabeth lives after she is sold to them as Victor’s special friend at five years old. It is across a body of water from Geneva where Elizabeth found Justine and saved her from her abusive mother. This...

More summaries and resources for teaching or studying The Dark Descent of Elizabeth Frankenstein.