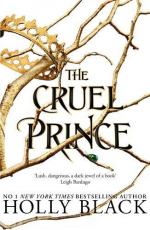 Holly Black
This Study Guide consists of approximately 71 pages of chapter summaries, quotes, character analysis, themes, and more - everything you need to sharpen your knowledge of The Cruel Prince.

This detailed literature summary also contains Quotes and a Free Quiz on The Cruel Prince by Holly Black.

The following version of this book was used to create this study guide: Black, Holly. The Cruel Prince. Little Brown and Company, 2018. Hardcover.

Jude, her twin sister Taryn, and her other sister Vivienne (Vivi), are taken to Faerieland by a faerie named Madoc after he kills their parents. Ten years pass and Jude has developed a strenuous bond with her new father, while Vivi continues her pledge to hate Madoc forever. Taryn and Jude prepare for a revel, where they will be introduced to various, high-ranking faeries in the hopes that a faerie will ask for their hand in marriage. Jude, however, wants to make a name for herself in Faerieland without relying on a marriage. She and Taryn prepare for a dance at the High King’s court, which Vivi refuses to attend. The two girls meet with Madoc and his new wife Oriana, the later of which demands that they do not embaress Madoc, as he is the High King’s greatest general. At the party, Jude and Taryn introduce themselves to the High King Eldred while Jude wonders how to join the Circle of Falcons, a group lead by the third-born Prince Darin who values bravery and combat skills. Jude then sees the sixth born Prince Cardan brutally rip off a wing of a young faerie who does not bow to him. However, she shares a brief smile with one of the Prince’s closest friends Locke, who chooses to help the boy before following after the Prince.

After a long day’s rest, Jude and Taryn return to the High Court for lessons alongside other faeries. Cardan and his friends harass the twins, but Jude refuses to show her anger. At home, she asks Madoc if she can participate in the tournament with the green sash to signify her desire to become a knight of the kingdom. Madoc refuses and tells her that she needs more than pure strength to be a successful knight. Furious, Jude retaliates against Cardan by dumping a large amount of salt into his food. However, this backfires when he and his friends kidnap Jude and Taryn and trap them in the mud of a lake. They tell Jude that the lake’s creatures - called Nixies - will drown them if Jude does not submit to Cardan and leave the tournament. Jude refuses, and Cardan forces Taryn to kiss him and renounce her sister to save herself. Jude encourages Taryn to do so, but refuses to give into Cardan’s demands herself. The prince leaves, and Jude gets herself out of the water so the two girls can return home.

Vivi takes Jude and Taryn to the mall where they meet Vivi’s girlfriend Heather who knows nothing of faerieland. Vivi plans to move them all to Heather’s home, but Jude does not believe she would survive in the human world. Back in faerieland, Jude confronts Cardan after he sees Taryn crying while talking to him. The next day, the tournament begins. Jude fights defensively until Cardan claims that Taryn has slept with someone and insults her. In response, Jude fights brutally, knocking down Cardan and his friends and pushing her team to victory. Afterwards, Cardan confronts her and demands that she beg for forgiveness. However, she refuses and says that he has everything to lose, while she has nothing. The more they fight, the more she can drag him down. Vivi applauds her courage, but Taryn is furious. After the tournament, Jude is approached by Prince Dain, who is intrigued by her ability to lie. He convinces her to join his Court of Shadows as a spy in exchange for a powerful gas that will leave her immune to all faerie control except for his own.

At lectures the next day, Jude is forced to eat fruit that removes her ability to control herself. Cardan saves her from being choked to death by Valerian, but then commands her to kiss his feet. Enchanted, she almost does so, but Locke takes her home. Madoc is furious, but Jude refuses to tell him who forced her to eat the fruit as she does not want him to kill them. In her room, she receives a message from Dain tell her to find proof of treason in Balekin’s home. She goes there the next day pretending to be a servant. Many of his human servants are enchanted to believe they love the work they are doing. She finds a letter referencing a shipment of an unknown item called blusher mushrooms. She traces it before she is forced to hide. Balekin and Cardan arrive, and Balekin forces the later to fight him. Balekin easily overpowers Cardan, and beats his brother who refuses to kill the human servant giving the punishment. Jude genuinely fears how cruel Cardan could become in his brother’s care.

Jude returns to Dain’s home and gives him the copied letter. He introduces her to Roach who takes her to the hideout of the Court of Shadows. She meets the other two spies, Ghost and Bomb, who say she will earn her own codename in time. Jude then returns home where she asks Madoc to teach her swordfighting and strategy. She gives Taryn a book she stole from Carden, but not before grabbing a sheet of paper that falls out. She later finds out that Cardan has scribbled her name dozens of times in furious handwriting. A dressmaker arrives the next day to help prepare then for the coronation. Jude begins slowly poisoning herself to build up immunity. After two more missions from Dain, Jude is invited to Locke’s house where she borrows one of his mother’s dresses and stays for a party.

The next morning, Jude wakes up in Locke’s room and returns to her lectures. There, she learns that the faerie crown is enchanted that only those in the royal bloodline can bestow or wear the crown as long as at least two of them live. If one kills for the crown, they too also die. Taryn confronts Jude about her time with Locke, but Jude insists they only kissed. At home, Jude finds a mechanised acorn she took from the dress of Locke’s mother. A voice inside asks a friend to protect her son (both identities are unknown). Locke believes the boy mentioned is Locke. She then returns to Balekin’s home, where she fails to find any mention of Locke’s mother. However, she rescues a girl named Sophie on the way out, but Sophie kills herself during their flight to the human world, unable to bear the reality of magic. At home, Dain berates her for going against his orders and attacking Valerian who attempted to kill her the day before. He commands her to stab through her hand, and she does so. That night, however, Valerian sneaks into Madoc’s home and attacks Jude. She stabs him through the chest, and he dies cursing her to be surrounding by death.

After Ghost teaches Jude how to climb around the rafters, the two wait for hours to kill one of Balekin’s messengers. However, when they approach the body, Jude recognizes that the messenger is one of Madoc’s spies. Ghost knows they have been set up. At home, Jude buries Valerian and prepares for the coronation where they will meet Taryn’s suitor. At the coronation, King Eldred declares Dain his successor, but Balekin challenges his brother as the crown is passed on. Dain refuses and Balekin kills his sister as Madoc kills Dain. The rest of the royal siblings die to Balekin, Ghost, and suicide until only a missing Cardan is left. The crown burns Balekin as he places it on his head. The other courts tell him he has three days to get Cardan to place the crown on his head or they revolt. Jude hides under a table where she eventually finds Cardan. The two run to the top of the palace where she captures him and takes him to the Court of Shadows.

Back at the hideout, Jude searches Dain’s office to find any reason why Madoc might have betrayed him. The other spies return and debate on how to handle Cardan. One wants to kill him, while another wants to sell him off. Jude asks them to keep Cardan for one night so she can return home. They agree. At home, Jude learns that Taryn’s suitor is Locke, who has also been courting her. Furious, Jude challenges Taryn to a duel. They are stopped by magic from Vivi. However, Jude is forced to let go of her sword as Dain’s protection outlasted his death. Madoc tells them Locke is not worthy of either of them, but will allow Taryn to decide. He then talks to Jude about his betrayal. He asks her to bring him Cardan. Jude finds Oriana and discovers that she had cut Dain’s child out of the womb of the mother who he had poisoned. Therefore, Oak is a legitimate heir to the throne. Jude returns to the Court of Shadows where she confronts Cardan about his hatred for her. He admits that he cannot stop thinking about her and Jude steals a kiss.

That night, Jude decides she is going to steal the crown. She tells Cardan that he will be free from the High Court if he swears his service to her. He agrees to one year and a day. The next day, she recruits two influential court leaders to help her and returns home. There, she convinces Vivi to take Oak to the human world after the coronation. Jude and Cardan go to Hollow Hall where they are confronted by Balekin and Madoc. Jude poisons the wine she gives to Madoc and herself, but her immunity keeps her from passing out. Jude leaves Cardan and confronts Madoc. The latter ends up passing out after a quick sword fight due to the poison. The rest of the spies enter and Bomb detonates an explosion. Balekin protects Cardan, but Cardan does not return the favor. Ghost steals the crown and accidentally tosses it to Taryn who eventually, and reluctantly, gives it to Jude. She then gives it to Oak and commands Cardan to kneel. Oak prclaims Cardan the new High King. Cardan is furious, and promises Jude he will return her gift of the crown in kind. Days later, Jude accompanies Vivi and Oak to target where Oak has been glamoured to look like a human and Heather has agreed to let them stay. Jude must return to Faerieland, as she is in control of the High King. Once there, Cardan mocks her for sacrificing everything for the throne, and says he will enjoy being the king while she does all the work. Jude knows she has one year to make another bargain, or Oak may never become king.

More summaries and resources for teaching or studying The Cruel Prince.