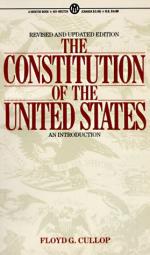 The Constitution of the United States: An Introduction - Part IV: Amendments Since the Bill of Rights Summary & Analysis

Floyd G. Cullop
This Study Guide consists of approximately 23 pages of chapter summaries, quotes, character analysis, themes, and more - everything you need to sharpen your knowledge of The Constitution of the United States.

Part IV: Amendments Since the Bill of Rights Summary and Analysis

This section lists the remaining amendments to the Bill of Rights and the dates on which they were executed.

This amendment changes Article 3, Section 2, and states that a civil or equity suit brought against a state by a citizen of another state or from a foreign country may be tried in federal court.

Amendment 12 (1804): Electing the President and Vice-President

This amendment changes a part of Article 2, Section 1.

This amendment outlines the process by which a president and vice president are elected to office, including the importance of the electoral vote.

This amendment is broken down into two sections, outlawing slavery and involuntary servitude outside punishment for being convicted of a crime. This amendment also allows Congress to enforce the...

(read more from the Part IV: Amendments Since the Bill of Rights Summary)

The Constitution of the United States: An Introduction from BookRags. (c)2022 BookRags, Inc. All rights reserved.