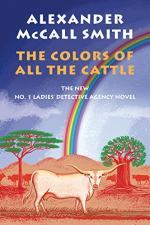 Related Topics
Morality for Beautiful Girls
Tears of the Giraffe
The Kalahari Typing School for Men
The No. 1 Ladies' Detective Agency

The Colors of All the Cattle: No. 1 Ladies' Detective Agency (19) Summary & Study Guide

Alexander McCall Smith
This Study Guide consists of approximately 53 pages of chapter summaries, quotes, character analysis, themes, and more - everything you need to sharpen your knowledge of The Colors of All the Cattle.

The Colors of All the Cattle: No. 1 Ladies' Detective Agency (19) Summary & Study Guide Description

The Colors of All the Cattle: No. 1 Ladies' Detective Agency (19) Summary & Study Guide includes comprehensive information and analysis to help you understand the book. This study guide contains the following sections:

This detailed literature summary also contains Quotes and a Free Quiz on The Colors of All the Cattle: No. 1 Ladies' Detective Agency (19) by Alexander McCall Smith.

The following version of the novel was used to create this study guide: McCall Smith, Alexander. The Color of All the Cattle. Pantheon, November 6, 2018. Kindle.

In The Color of All the Cattle by Alexander McCall Smith, McCall Smith explores the idea that doing the wrong thing for the right reason is still wrong. Precious Ramotswe had been cajoled by her friends into running for a spot on the city council. They hoped that Ramotswe would be able to defeat the immoral Violet Sephotho and vote against the proposed Big Fun Hotel which was to be built next to a cemetery. As Ramotswe questioned her own motives for agreeing to run for the spot, she tried to teach Charlie, an apprentice in her detective agency, that it was wrong to follow illegal practices, even if he was doing so in the hopes of helping a person who needed that help.

As Ramotswe was still reeling from a magazine article her friend and business partner, Grace Makutsi, had read to her that suggested that Ramotswe was leading a pointless life, Ramotswe went to visit her confidant, Sylvia Potokwane. Potokwane assured Ramotswe was not living a pointless life. In the case that she needed a challenge, Potokwane suggested that Ramotswe run for a seat on the city council. The council was preparing to vote in favor of allowing the Big Fun Hotel to be built on the lot next to a cemetery, a location that many citizens believed was disrespectful.

Ramotswe tried to refuse her friend’s suggestion, but she additionally got her friend, Makutsi, also pushing her to run in the election. Makutsi had learned that her nemesis, Violet, would be running unopposed if Ramotswe did not run. Makutsi told Ramotswe that they should just as well move out of town if Violet won the election. Potokwane cried and told Ramotswe that their country would never be the same if Ramotswe did not run.

Meanwhile, Ramotswe had gotten a case by a doctor whom Ramotswe knew from her childhood and respected greatly. Dr. Marang had gotten hit by a speeding car and had suffered a variety of injuries including two broken legs and a broken hip. Marang could remember only that the car was blue. The police had given up on finding the driver but Marang and his daughter hoped that Ramotswe could find them so they could get reimbursement for some of his hospital expenses.

Charlie, an apprentice at the detective agency, was given charge of Marang’s case because he had a friend, Eddie, from Marang’s town who did body work on cars. When Charlie approached his friend about getting information about a blue car that might have come in for bodywork, Charlie wound up getting threatened by Eddie. Eddie claimed the man who owned the car would hurt Charlie if he continued asking about the case. To prove the point, a brick was thrown through Charlie’s window a few days later.

Meanwhile, Ramotswe won the election and prepared to take her seat for the first meeting of the city council. At the beginning of the meeting the chairman announced that if the proposal for the Big Fun Hotel did not pass, he and all of the other committee members would resign. After a heated discussion, the chairman called for the vote. It was tied. Because Ramotswe was so unfamiliar with being on the council, she had forgotten to vote and pointed that out to the chairman. She cast the deciding vote against the hotel.

Returning to Charlie’s investigation, Ramotswe and Charlie decided that the person who had threatened Charlie was one of Eddie’s friends. They decided to go and talk to Eddie’s mother to see if she knew if any of his friends drove a blue car. In the middle of the discussion, Charlie asked Ramotswe to go outside with him. He admitted to her that he knew it was Eddie who had been driving the car that hit Marang. He knew this because Eddie’s car had once been blue but he had repainted it red about the same time as Marang’s accident. When they went back inside to confront Eddie’s mother with that knowledge, Eddie’s mother admitted that she believed it was her son who had hit and injured the elderly doctor. She feared that Ramotswe would make Eddie go to jail but instead a plan was worked out so Eddie could reimburse Marang for his medical expenses.

More summaries and resources for teaching or studying The Colors of All the Cattle: No. 1 Ladies' Detective Agency (19).

The Colors of All the Cattle: No. 1 Ladies' Detective Agency (19) from BookRags. (c)2022 BookRags, Inc. All rights reserved.