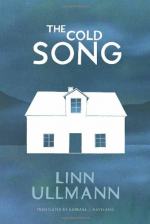 This detailed literature summary also contains Quotes and a Free Quiz on The Cold Song by Linn Ullmann.

The Book "The Cold Song" by Linn Ullmann, is a fictional piece that surrounds the lives of an ordinary family and the death of their nanny, Milla.

The story begins with an older woman getting dressed for her 75th birthday party. Her name is Jenny. She doesn't care for her daughter, Siri, and hates that this party is being done at all. Her daughter owns a restaurant and is a highly acclaimed chef, but Jenny doesn't care. Her daughter annoys her.

The reader isn't given an indication to show what the time period is, but only offers an event. Several boys, who come to the area each summer on holiday, have determined to seal their friendship by each contributing some 'treasure' which they will bury. The secret will bind them, they declare. The action fast forwards to the next summer when they are, once again, reunited. They go to dig up the treasure, but instead, find the body of a two-years-missing girl named, Milla. The boys are upset because they had known Milla, though she had been older than they were.

The action shifts to the past to show John and Siri, and their two daughters, Liv and Alma. Siri owned a business so the couple hired a nanny to watch the children. The nanny's name was Milla. Milla cared for them and began to discover that she had feelings for Jon. Milla was the daughter of a renowned photographer and couldn't seem to stop taking pictures, herself. She liked to take pictures of people when they least suspected it, as if to capture their 'secret selves'. Milla didn't like that she took photographs because a good deal of her childhood was spent seeing a camera lens in front of her mother's face. She resented that her mother used the camera as a way to separate herself from Milla.

The day of the party Milla overheared Siri and her mother arguing in the kitchen. Jenny (Siri's mother) argued bitterly about not wanting a party and not wanting any special foods being made for her. Milla felt badly for Siri and for a moment wished she had her camera so that she could capture the raw emotion on Siri's face. However, she was still upset with Siri for yelling at her for picking a flower in the garden to place in her hair for the party. Deciding that she's going to blow off the party, since Jon wasn't paying any attention to her, Milla changed and decided to go into town to find some fun. That took a turn when she met a boy named KB. After they spent the evening together in town, they went on a walk into the woods and KB raped Milla. He left her there, but returned later to find her walking along the road. He told her at the time to get into the car, that he would at least take her home. She agreed and got in. This was the last time anyone saw Milla alive.

When Milla came up missing, both Siri and Jon were barraged by Amanda (Milla's mother) with text messages about her daughter. Alma, the older daughter of Siri, started to act out in school due to Milla's death and was expelled. This is when the reader learns that Alma knew more then they originally thought about the murder, as does Jenny.

Jon and Siri's marriage continues to slide downhill at a rapid pace and the reader learns that Jon has been having affairs for decades, and that Siri has known about many of them. Finally fed up with Jon, Siri confronts him with all of the hurt and anger she's bottled up for years and makes plans to divorce him. Forensics come back on Milla's body and KB is arrested on suspicion of murder.

Jenny slips on a patch of ice, breaks her hip and ends up an invalid in her own home. She is looked after by her long time roommate, Irma. Irma is determined to keep Siri away from Jenny, but Siri pushes her aside. Siri sees that her mother has the early stages of dementia and is upset. Meanwhile Jon's publisher has had enough of his stalling and asks that he pay back his advances on the third book. He begins to have a nervous breakdown. Siri goes to see her mother and while she is taking care of her, Jenny explains that she never blamed Siri for her brother's death. This brings some comfort to Siri, who has felt the guilt of that moment for many years. Her mother also rambles and tells Siri that the car broke the girl by the road. Siri tries desperately to get her mother to tell her more, but Jenny slips back into her dementia.

It is another summer and Jenny has passed away. Jon and Siri are still together and have moved back into their bedroom together, though they are still distant towards one another. Milla's parents, who have continued to text Jon for many years, come by to visit. They are invited in, Alma confesses that she saw Milla that night, and the two families are able to begin a dialogue.